If Singapore hawkers are Unesco heritage, why not India's desi street food?

When Singapore’s hawker centres were recognised by the United Nations in December for their cultural significance, street food lovers across the globe had reason to celebrate.

After a two-year campaign, the UN’s cultural agency Unesco had finally added the world famous open air food courts to its List of the Intangible Cultural Heritage of Humanity, thereby confirming what most foodies already knew instinctively to be true – that food with the humblest of origins is often worthy of the highest praise.

But while Singapore was widely seen to have been served its just deserts, the decision has only whetted the appetites of other countries seeking recognition of their own street food traditions. And perhaps nowhere is this hunger greater than in India , where foodies and chefs have spent the past few weeks debating on television and radio why similar recognition has so far eluded the desi (local) street food scene.

“Indian street food needs to be celebrated in all its glory. Giving food vendors a badge of honour like Singapore’s hawkers would acknowledge their hard work and dedication to a craft that is centuries old,” said a television anchor on a local channel last month.

The breadth of India’s street food scene is indisputable. From spicy chaat (fried dough) in Delhi to jhal muri (puffed rice) and mishti doi (sweet curds) in West Bengal to litti chokha (lentil dumplings) in Bihar and mutton stew in Kerala, India and its 1.3 billion strong population are host to a smorgasbord of local delicacies that for sheer variety is perhaps unmatched anywhere in the world. The choices on offer become even more daunting when one considers that recipes for many of the best known dishes have been honed over centuries, resulting in myriad local versions that would take even the most talented chef a lifetime to master. Whole cookbooks and television shows can be devoted to just a single food type, be it kebabs, samosas, naan bread or aloo tikki (potato chops).

It was partly such variety that helped win Unesco over to the joys of Singapore’s hawker centres, whose multicultural tapestry includes affordable and freshly cooked takes on Chinese, Malay and, indeed, Indian cuisine. 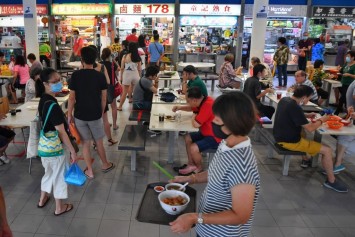 But while Singapore’s 110 or so hawker centres are tightly regulated – soon after the nation’s independence vendors selling food out of pushcarts were moved to purpose-built centres as part of a government effort to clean up the industry – the scene in India remains sprawling and freewheeling. Street vendors receive little-to-no assistance from authorities.

A 2019 industry report estimated only US$24 billion (S$31.9 billion) worth of India’s US$64 billion food services market was licensed. Much of the rest is made up of dhabas (roadside eateries), push carts, small restaurants and cloud kitchens delivering directly to homes.

These small-time vendors might not yet have gained the approval of Unesco, but they have tickled the taste buds of the rich and famous, from the stars of Bollywood and Hollywood to heads of state.

At Victoria Vada – a hole-in-the-wall kiosk in the eastern city of Kolkata – on proud display are pictures of Britain’s former Prime Minister David Cameron tucking into to its famed dal vadas (lentil dumplings). At the Bengali Sweet House in central Delhi, which has been in owner Lakshay Aggarwal’s family for three generations, government ministers and Bollywood actors are often to be seen seeking a sugar rush.

“When people indulge in street food, they also partake of India’s history as it includes eclectic influences from the British, the Mughals, the Portuguese, the French, etc, who lived here for centuries,” says Makkar.

Legend has it that chaat (meaning “to lick” in Hindi) was first created in the northern Indian state of Uttar Pradesh during Mughal emperor Shah Jahan’s rule in the late 17th century. The emperor, worried about his subjects falling prey to waterborne diseases during the monsoon season, advised his chefs to invent a dish that would treat such malaises. Thus was born chaat, a delicious jumble of piquant spices, savouries, fruits and gut-friendly yogurt that is believed to slay stomach infections and fortify the digestive system.

“Street dining transcends the idea of just filling stomachs. It encourages mingling and creates food theatre as well. The sizzle of woks, chopping and churning of ingredients, the drama of deep frying and the friendly banter exchanged with the vendor as well as dining partners contribute to creating a more convivial public space as well,” says Makkar.

Amisha Paliwal, a native of Delhi who worked in Singapore for three years as an IT professional and was a regular at Tiong Bahru Market and Hawker Centre, also believes it is time to recognise India’s street food vendors.

“The entrepreneurial spirit, diligence and positivity of food vendors are inspiring. They cook and serve from the heart,” he says.

Something to chew on

However, if India is to follow Singapore in gaining Unesco recognition for its street food, authorities will need to demonstrate how they are safeguarding and promoting its traditions. This will be a considerable challenge in a country with so many local cultures, where each state has multiple traditions of its own and where the residents of one state will often be aware of the delicacies in the next.

Even when there are overlaps, vendors in each state give their own twists to dishes, points out Amit Wadhera, executive chef of New Delhi’s The Park Hotel.

He gives the example of chaat, a blanket term for fried dough snacks. In Delhi, papdi chaat is doused in curd; in Lucknow, matra chaat is mixed with chickpeas; in Mumbai, sev puri chaat is a deep fried.

Wadhera himself knows much about mixing and matching; one of his most popular dishes is a street-food inspired Thai kale chaat with beetroot served with kombucha shots, another is his Delhi-inspired khulle ki chaat (hollowed out cucumber, potato or tomato filled with spices, chickpeas and pomegranate seeds).

Vishal Jindal, co-founder of Biryani By Kilo, a brand inspired by street food which has a presence in 26 cities, says the informal industry needs more support from the government as it plays a vital role in generating jobs and incomes.

“This informal sector is a pillar of sustenance for societies, provides livelihoods to millions and feeds the poor. If a template based on training, legalities, hygiene, and preparation is executed by different authorities and street vendors are supported through such initiatives, the industry can be a force multiplier for the economy,” he says.

Others suggest the government make street cuisine an anchor of its tourism initiative. They say street vendors need more support, especially at a time when the coronavirus has dealt such a blow.

“Most hawkers are migrant workers from far-flung villages and towns. When the pandemic struck, they couldn’t afford to keep living in the city and pay rent with no customers. This forced them to go back home,” says an official from the National Association of Street Vendors of India (Nasvi), an umbrella group that has organisations working with more than 70,000 street vendors to lobby the government to improve their livelihoods.

India should look to Singapore not only for its Unesco success, but to learn from its support for hawkers, which includes helping them move to digital payment systems and providing financial support to train a new generation, observers say.

Though the Indian government has announced a loan scheme of US$150 per vendor, which can be repaid in instalments over one year, industry experts say this isn’t enough. Making laws and enforcement agencies more friendly towards vendors and hooking them up with app-based food delivery companies such as Swiggy and Zomato are also important, they say, as are an emphasis on fair pricing and hygiene, as seen in Singapore’s approach.

Doing so, says the Nasvi spokesperson, can “help incorporate these vendors into the formal economy while also preserving India’s precious culinary heritage”.