'I'm not a devious villain': Black men in Japan speak out about racial profiling

A demonstrator holds a placard during a protest march in Japan in 2020.

For a black website producer who goes by the online name Gizmo, the most humiliating experience of his 11 years in Japan was also the most infuriating. While being stopped and quizzed by the police has been a regular occurrence, he said, one unnecessary confrontation could have caused damage to his personal and professional reputation.

And it has left him convinced that the warning issued by the United States Embassy in December that Japanese police appear to be applying "racial profiling" in who they choose to stop, question and search is absolutely correct.

"A couple of years ago, I was working as an English-language teacher at a public school near where I live in Hamamatsu City and I had just finished classes for the day," he said. "I was walking to the bus stop right outside my school and I saw a police patrol car go by. I looked down at my phone for a moment and heard 'excuse me' from an officer."

Gizmo, who is originally from the West Indian islands of Trinidad and Tobago but spent time in his teenage years in New York and Arizona, is still clearly angry about the subsequent exchange.

"In seconds there were four officers around me, really close and in my face," he said. "They asked for my identity card, they wanted to look in my bag and then they asked if they could frisk me.

"This was going on right outside the school where I worked. There were students walking past and parents arriving in cars to get their kids and everyone was looking at me and I thought to myself that they were all probably thinking the same thing: 'The police have got another troublemaking foreigner'," he said.

"It was humiliating. I told the police that I had not done anything wrong and that they had no reason to search me, but their response was that if I was not doing anything illegal then I had nothing to worry about when they searched me."

Gizmo's identity paperwork was in order and he was not carrying anything illegal so he was permitted to go on his way, but it left him angry.

"I have dark skin and dreadlocks so that makes me an easy target for the police here," he said, adding that the way he looks effectively triggers an assumption in police that he is carrying "drugs or weapons", he said.

Gizmo is relieved that police in Hamamatsu, a coastal town some 260km (160 miles) southwest of Tokyo, are at least polite and non-confrontational when they quiz him, but being stopped every couple of months still leaves a bitter taste in his mouth, he told This Week In Asia.

"If a police officer sees me riding my bike, jogging, walking down a street, I just know they are going to stop me," he said, adding that while white friends are occasionally pulled over by the police, his Japanese friends seem to be immune to their attention.

On Dec 7, the US Embassy in Tokyo used its Twitter account to issue an alert that read, "The US Embassy has received reports of foreigners stopped and searched by Japanese police in suspected racial profiling incidents. Several were detained, questioned and searched. US citizens should carry proof of immigration and request consular notification if detained."

The same day, Chief Cabinet Secretary Hirokazu Matsuno told a press conference that stop-and-search decisions are "conducted according to the law on people with reasonable suspicion that they have committed crimes or are going to commit crimes". He added that people are not stopped based on their race or nationality.

A report by the Tokyo Bar Association earlier this year determined, however, that nearly 63 per cent of the 2,094 foreign nationals taking part in a study had been questioned by police in the preceding five years.

Aware that its officers were under scrutiny, it emerged in mid-May that the National Police Agency (NPA) had issued an advisory to all regional forces instructing officers that they "should not base their decisions solely on how [a suspect] looks, such as appearance and clothing".

Noah Hickman, an African-American musician and graphic artist from New Orleans, said that after 22 years in Japan he "sort-of expects to be stopped" whenever he crosses paths with a Japanese police officer.

"I have a big car and I was parked up near my home in southern Kyushu when an officer came over and asked me how much I had paid for it," he said. "I guess he was suspicious about what I was doing for a living that allowed me to buy a nice car.

"But I guess that for a cop whose biggest problem is usually people illegally parking their bicycles, I guess it can be pretty exciting to come up to a black guy in a nice car," he added. "It probably made him feel important for a little while."

Hickman, 54, served as a reserve police officer in Minneapolis and says his training on how to de-escalate a potentially confrontational situation has served him well in Japan. 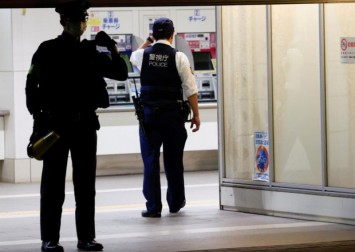 Officers are almost invariably disarmed if he approaches them with a smile and a relaxed demeanour while addressing them in Japanese also goes a long way to calming any situation.

Malcolm Adams, a former journalist who now runs several businesses in the central Japan city of Kakegawa, Shizuoka Prefecture, agreed that being able to communicate with officers in Japanese tends to make things go more smoothly.

However, his friendship with the local police chief also came in handy when two overzealous young officers became confrontational when he declined their request that they search his car on the grounds that they had no reason to conduct a search.

Gizmo concurred that local connections are always helpful, but insisted that a non-Japanese person who is not breaking a law should never have to justify their mere presence on a street.

"After that incident outside the school, I almost felt like I was seen as some sort of devious villain by everyone around me," he said. "I'm just leading my life, but that is how people see me in Japan because of the colour of my skin. I've been doing this dance for a long time now, and it has become exhausting."