Several Indonesian independent churches have links to some of the biggest megachurches in Singapore.

The joyous congregation falls into a quiet hush as the music fades away. With an outstretched arm, the sharply suited pastor strides across the stage holding a microphone, giving thanks to God and calling for his presence to fill the hall.

Almost in unison, the congregation around me, a significant portion of whom are young ethnic-Chinese Indonesians, raise their hands in fervent concentration to echo their pastor's call. It is hard to tell if the waft of cold air descending upon our skins is the Holy Spirit or the shopping centre's central air-conditioning system, but it feels delicious nonetheless.

This service is taking place in one of largest shopping malls in central Jakarta. The intertwining of retail and religion has become an increasingly common sight in Indonesia's urban centres, and has coincided with the growth of independent charismatic churches in the country.

Outside the Philippines, Indonesia is home to the largest Christian community in Southeast Asia. According to official data from 2010, there were around 23.4 million Christians in the country, making up nearly 10 per cent of the total population. A key feature of this community is the growth of independent churches. 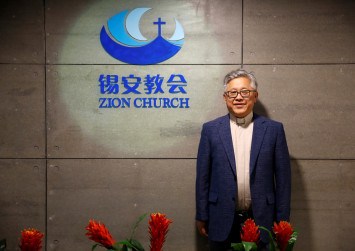 Like most independent churches, those in Indonesia share three characteristics. Firstly, they are usually led by a charismatic senior pastor who may have founded the church. This pastor is often the face of the church and the ultimate authority for all church-related matters.

Crucially, these senior pastors enjoy financial autonomy. Without affiliation to mainline denominations, church funds are free from centralised control, thus giving pastors full discretion over the financial policy and spending of the church (or churches) they preside over.

Secondly, independent churches, as the term implies, have no institutional affiliation or concessions to theological authority, unlike the Anglican or the Catholic parishes, which answer to the Church of England or the Vatican, respectively. While this means independent churches do not have a global network of resources to tap on, they have become very apt at developing networks and relations with like-minded churches within the country and beyond.

For example, several Indonesian independent churches we encountered have links to some of the biggest megachurches in Singapore. Such links include the transnational flow of guest preachers, the adoption of the cell group model from Singapore churches, and the appropriation of technologies and practices that enable more efficient services, such as the electronic transfer of tithes.

Several of the Indonesian pastors we spoke to saw Singapore as an advanced theological hub from which they could learn, thus generating a symbiotic relationship between the independent churches in these two countries.

Establishing a church is relatively straightforward in Indonesia. It first has to acquire membership to a synod, which generally serve as filters to ensure churches within their fold do not espouse teachings detrimental to Indonesian society.

Only with synod membership can the new church approach the Ministry of Religious Affairs for formal registration. Once official registration has been approved, the church may begin to conduct services and other related activities.

The physical construction of a church is a little trickier. Since 2006, it has become mandatory for all religions, including Christianity, to apply for a building permit before construction can begin.

Many churches fall at this bureaucratic hurdle - and in trying to circumvent it, more Indonesian churches are finding their way into shopping malls.

There are several reasons for doing so. For one, auditoriums and halls in shopping malls are ready-made venues for large numbers of people. With large car parks and escalators and wide corridors, they facilitate large flows of people.

They are also conveniently located in retail spaces where younger congregants gather anyway. And finally, many of these malls have their own security. This offers a sense of reassurance that a stand-alone church in a Muslim-majority neighbourhood lacks.

One Chinese Indonesian church leader whose church is located in a major shopping centre in Jalan Casablanca, south Jakarta, notes that "Muslim radicals are much less likely to protest outside [shopping malls] to demand that developers close down the mall".

These temples of mass consumption, far from weakening the church, actually offer refuge from hostile groups in multicultural societies. In addition to retail spaces, these churches also prefer to be located in business areas and assiduously avoid residential areas for fear of open opposition.

This trend is also noticeable in Singapore. However, the Singapore model differs from that in Jakarta and Surabaya. The city state's independent churches are often compelled to use non-traditional spaces such as old cinemas, hotel ballrooms or auditoriums because of limited land. Not only do they have to compete with other mainline denominations for sites that have been designated places of worship under the state's urban master plan, but also with other religious groups such as Muslims, Hindus and Buddhists.

As such, many have resorted to using commercial or industrial buildings. A handful of Singapore megachurches are wealthy enough to become major stakeholders in such buildings. Government guidelines, however, limit the religious use of these retail and commercial buildings to 10,000 square metres and prohibit public displays of religious iconography such as crucifixes or biblical depictions.

The reasons and motives for this practice clearly vary in the region. There is an instinctive turn to capitalist practices and commercial spaces when the state (Singapore) or other religious groups (Indonesia) do not allow for independent churches to construct buildings for themselves. Be that as it may, in all cases, retail comes to the aid of religion.

Terence Chong is a sociologist and Deputy Director of ISEAS-Yusof Ishak Institute, Singapore.