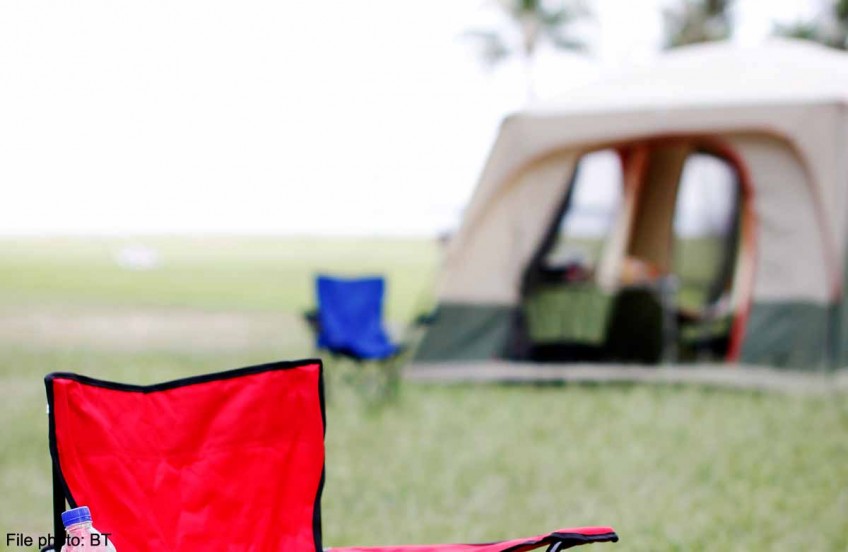 A campsite fire that broke out early Sunday on an island in Incheon killed five people, including three children, and left two injured, officials said.

The deadly fire occurred at a tent set up at a campground near a beach on Ganghwado Island, near the western inter-Korean border, around 2 a.m. Sunday, according to Incheon Ganghwa Fire Station and police.

A 37-year-old camper surnamed Lee died in the fire along with his two sons, ages 11 and 6. Another man surnamed Cheon ― who was later identified as Lee's friend since middle school ― and his 7-year-old son were also killed.

The bodies were transported to Ganghwa Hospital.

Lee's second son, 8, was rescued from the site by a 43-year-year-old man surnamed Park who had been camping in a nearby tent.

"I went into the tent after evacuating my own children, and found the boy who was crying near the entrance," Park said.

Park and the boy suffered from smoke inhalation and second-degree burns and were moved to Bucheon's Soon Chun Hyang University Hospital and Bestian Medical Center, respectively, for treatment.

According to fire officials and closed-circuit television footage, the fire engulfed the tent, made from inflammable material, in about three minutes.

The flames were already subsiding by the time rescuers arrived on the scene, and died out completely approximately 25 minutes after ignition.

Officials had yet to determine the cause of the fire.

"There isn't much evidence since the tent has been destroyed completely. We have to conduct further investigation to determine what exactly caused the fire," Ryu Hwan-hyeong, the head of Incheon Ganghwa Fire Station, told reporters.

CCTV images showed that the fire originated from a spark from inside the tent, leading police officials to suspect that an electronic heating device was responsible for the tragedy. They have requested the National Forensic Service to analyse the evidence.

Police said they were questioning operators of the campsite over possible neglect of fire prevention or facility registration protocol. Investigators also commenced a probe against the site's owner.

The campsite was being used for so-called "glamorous camping" or "glamping," a trend of camping that incorporates high-tech gadgets like computers, refrigerators, TVs and electronic heating devices.

But the latest fad here remains largely in the blind spot of government regulations such as fire inspections due to a lack of inclusive guidelines that oversee such accommodation facilities nationwide.

There was no fire extinguisher inside the tent, despite being furnished with multiple electronics that could have potentially started a fire.

Prime Minister Lee Wan-koo ordered prompt countermeasures after the accident, and urged Public Safety and Security Minister Park In-yong to step up fire safety inspections on campgrounds and lodging facilities across the country.