In India, a park made of human ashes pays tribute to victims of Covid-19's second wave

When local residents start using a new park in Bhopal for their morning walk, they may not know that they are treading on the remains of the 6,000 people who were cremated at the nearby crematorium during India’s second wave of coronavirus infections.

Until recently, the ashes had lain in Bhadbhada Vishram Ghat crematorium in large urns, uncollected by any relative. While wishing to accord them all due respect, crematorium manager Mamtesh Sharma, 51, was increasingly concerned about space.

“At the height of the second wave after we had been burning 100 to 150 bodies a day, we had to keep making space. We added more and more lockers in which we keep the urns. Once we made space for 500 lockers. Then we added another locker room. Now there isn’t any space left but we need space for other cremations,” he said.

The obvious solution was to immerse the ashes, according to Hindu tradition, in the Narmada river, which flows through Bhopal. But Sharma did not want to pollute the river with such a huge quantity of ash in one go. It takes about 500kg of wood to cremate a body, resulting in around 50kg of ash.

The solution, Sharma and his colleagues decided, was to mix the ashes with soil, sand, wood sawdust, and cow dung and scatter it on the 12,000 sq ft of nearby wasteland and turn it into a memorial park for the dead.

About a week ago, Hindu priests chanted prayers and draped orange marigolds over some of the urns before mixing the ashes with the other substances and spreading it on the ground. The first sapling was planted by Shivraj Singh Chouhan, the chief minister of Madhya Pradesh state, where Bhopal is located.

Soon, hundreds of saplings will be planted using the Japanese Miyawaki technique. The technique is used to create dense woods quickly by planting saplings very close to each other, to ensure they receive sunlight only from above, encouraging them to grow upwards rather than sideways. 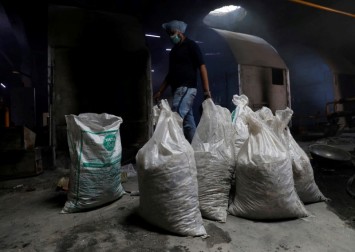 For Sharma, the memory of those days between April and June will never be forgotten. At its height, India was recording 400,000 infections a day and crematoria like his were overwhelmed.

“Some families were so frightened when they brought their dead that they left the body hurriedly at the entrance and left, leaving my staff to perform the final rites,” he said.

He was not surprised that the ashes of 6,000 people remained uncollected. It was an extraordinary time, he said, when normal rules did not apply.

Fear and panic had gripped the city so much that the customary rituals of respect for the dead were abandoned. Lockdown restrictions made it difficult for some. Some feared catching the virus from the remains. Others came but took only some of the bones, which they could carry easily in a small bag, but not the large quantity of ash.

Sharma said many survivors of Covid-19 in the city had told him they would plant the saplings and look after them. The park, he hoped, would be a peaceful and beautiful memorial to those who died, to help make up for the indecent and rushed rituals of the time.

Rajneesh Kapoor, 32, who owns a bicycle shop in Bhopal, cremated his 60-year-old father at the crematorium in early May. He collected his father’s remains and kept them at home until the second wave ebbed. Then he travelled to Varanasi to immerse them in the Ganges.

Asked if he would feel uneasy at having a stroll in the park knowing human ashes lay underfoot, Kapoor replied emphatically: “No.”

“Quite the opposite. It will make the act of remembering them even more meaningful to know their ashes are in the soil. Everything happened in such a blur of fear and pain that none of us had time to think. Going to the park will give us a peaceful way of remembering those who have gone,” Kapoor said.