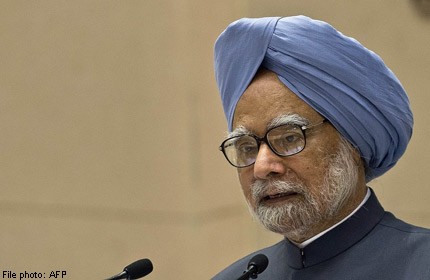 NEW DELHI - India's embattled prime minister appealed Saturday to the media, increasingly critical of his scandal-hit government, not to launch a "witch hunt" while investigating corruption.

Manmohan Singh's call came as his Congress-led government struggles to restore order in parliament where opposition parties have stalled business in a row over allegedly illegal allocation of mining rights.

"The spirit of enquiry must not morph into a campaign of calumny," Singh, 81, said while launching a state-built media centre in the Indian capital.

"A witch hunt is no substitute for investigative journalism," the prime minister said and urged media groups to rise above "personal prejudices".

Singh's shaky government, which hopes to win a third consecutive term in elections that must be held by next May, has been weakened by a string of corruption scandals involving cabinet ministers and top officials.

The controversies include the awarding of mobile telephone spectrum at below-market prices and huge cost-overruns during the 2010 Delhi Commonwealth Games.

Singh's comments came as leading news magazine India Today in its latest edition accused his government of failing to deliver at a time when the economy has slowed sharply, inflation is stubbornly high and the currency has tumbled against the dollar.

"He is today the meekest head of a moribund government that has already abdicated its responsibilities," the magazine said in lead story.

One TV station has begun lampooning the economist-turned premier and his finance minister, broadcasting animated cartoons of the two chasing a giant rupee coin downhill.

The main opposition Bharatiya Janata Party plan to attack Singh's Congress party-led government over the scandals during the next election campaign.

Singh's government was reduced to a minority last September when a key ally withdrew support from the ruling coalition to protest changes aimed at liberalising India's still mainly closed economy.