Indian children struck by grief, loss and guilt as many lose parents to Covid-19

In his first conversation with a counsellor, Alok (name changed to protect his identity) said nothing for 15 minutes. In the second call, the silence lasted 11 minutes.

In the third, eight minutes passed before the 10-year-old boy, who last month lost both his parents to Covid-19 , finally spoke.

Vanita Yadav, a child counsellor in the northern Indian state of Uttar Pradesh, has learned to wait until her young patients are ready to engage with her.

“When he first spoke, it was not about losing his parents but about his education,” said Yadav, who is based in Lucknow city. “He had studied hard and was worried that the continued lockdown might mean the exams would be cancelled.”

During the profound trauma of India’s second coronavirus wave, Yadav has been helping children whose lives have been blighted in one way or another.

Like Alok, some have become orphans. Others have lost one parent.

Some have found themselves locked down at home, as many parents are so frightened by the contagiousness of the double-mutant variant fuelling India’s coronavirus surge, that they have forbidden their children to go out to play, exercise or visit friends.

Their fear stems from two things, Yadav said. Firstly, more children have caught the disease in this second wave than the first.

But Yadav noted that this wasn’t because children were more susceptible to the variants, but rather the absolute numbers of Covid-19 patients were simply higher than in the first outbreak.

The second is widespread speculation that a third wave would affect more children. The fact that some hospitals are preparing to treat more children doesn’t help to ease parents’ fears, Yadav said.

The Indian Academy of Paediatrics said in a recent statement that it was “highly unlikely that the third wave will predominantly or exclusively affect children”.

Read Also
'Death all around': Bereaved Indians search for solace amid pandemic as coronavirus rages on 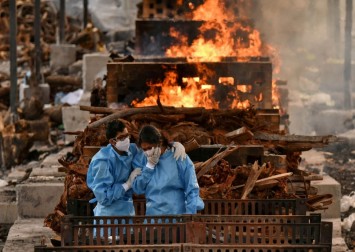 But hospitals are still reeling from the disaster of the past months when India saw some 400,000 new cases and more than 4,000 deaths every day. Patients failed to get hospital beds, oxygen supplies and medicines, and mass cremations became a common sight.

Hospitals have been devising new treatment protocols around the medicines and oxygen therapy that children should receive. Ventilators are being modified to suit smaller bodies, while ward layouts are being altered to create space for one parent to stay with a child.

“So far, hospitals have not allowed attendants to stay with Covid-19 patients. For children, this has to change,” said Suresh Kumar, an infectious diseases specialist at Apollo Hospital in Chennai.

A parent who tests negative for coronavirus may have to stay in a partitioned room for their own safety. “For children above 10 to 12 years, the parent can stay in hospital, but in a different room and meet the child from time to time with precautions,” Kumar said.

‘Not a normal childhood’

Amid a whirlwind of panic, fear and angst in the public, there is also guilt among children who have lost their parents.

“Bereaved children cannot understand how the virus did not touch them at all, although it took the lives of their parents who lived in the same house,” said Yadav, the child counsellor. “They struggle to process this.”

For Alok, his bereavement is just the tip of the iceberg. The city child will soon also lose all that is familiar and comforting, as his grandparents in a remote mountainous region in the neighbouring state of Uttarakhand have said they will take him in.

“His whole world suddenly collapsed. First the loss. Then so much change – moving to another home, city or village, a new school, leaving behind friends,” Yadav said. “He has only lived in a city and knows nothing of village life.”

Dr Videesh Gupta, who works with the Uttar Pradesh Committee for the Protection of Child Rights, said early data from the state, with a population of 200 million, revealed that about 1,100 children had lost one or both parents in the second wave.

The western state of Maharashtra, which has 120 million people, last month reported that 2,290 children had lost at least one parent.

Across the country, this would mean more than 8,000 children have been orphaned in the second wave, though the final figure is likely to be much higher than the early numbers indicate.

Read Also
India survey finds a quarter of children may have Covid-19 antibodies, more than average 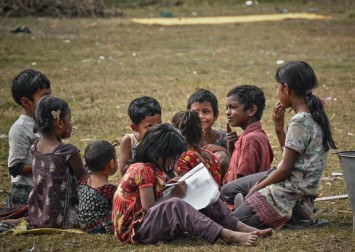 Gupta said of the families he had worked with, many children were struggling to cope with being confined at home.

“I know families where the children haven’t been out to play for weeks now. They are bored and irritable,” he said. “This is not a normal childhood, which is bad enough, and sometimes parents only make it worse.”

With so much grief, loss and displacement, many Indian children feel lost. Psychologists are seeing more cases of anxiety, obsessive handwashing and vitamin consumption, and symptoms of hypochondria, with people constantly wanting to check their temperature or suspecting a sore throat.

Some activists and child rights workers have found themselves doubling up as unofficial counsellors for children struggling with their mental health.

One of them is Surya Pratap Mishra, a coordinator for child rights group Bachpan Bachao Andolan, who works to ensure that coronavirus-affected children receive state benefits, such as monthly cash handouts for orphans.

Mishra has proven to be vital support on the phone for Anisa Kumar, a 17-year-old girl in Sultanpur, Uttar Pradesh, whose father Manoj died on May 9 after contracting Covid-19. They were very close, sharing a passion for mathematics. 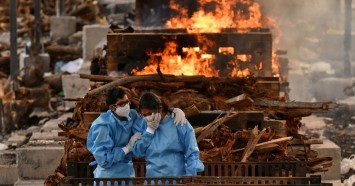 Anisa, the eldest of three children, said her father had progressive ideas about women.

“He always told me I could do anything as long as I got an education, and that I was no less than a boy,” she said. “For Papa, it was always books, books, books. He never bought me the clothes I wanted. Only books.”

Now Anisa has been thrust into the position of head of the family. Her mother is illiterate and so is unable to handle anything beyond household matters, she said.

The stress of supporting her family emotionally and financially keeps her awake at night. Her wider family has been reluctant to help out.

“Papa used to handle everything. He used to protect us all,” said Anisa, who has started giving maths tuition every evening, but earns very little. “Now it’s up to me, but I am only 17. I don’t feel ready.”

Mishra, the rights group worker, dug into his school memories of Mughal history to come up with references that could inspire confidence in Anisa.

“I told her that Akbar the Great ascended the throne when he was only 14, and had a whole empire to look after,” he said. “With our help, she could manage her little family, too.” 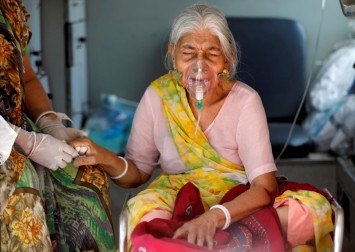 Although Anisa’s wider family has not been very helpful, Indian family bonds are generally very strong. Families with no money are known to take in a niece, nephew or grandchild instead of leaving them to experience the documented harshness of an Indian orphanage.

As a result, only a fraction of coronavirus orphans will end up in state care homes, according to Sonal Singh, the founder of Protsahan, a non-governmental organisation which operates in 48 slums in the Indian capital.

It is important to support these relatives who have already been struggling, Singh said. “That’s why we land up at the house to show that we are there to help, and that they aren’t alone. We make sure they have the extra groceries and medicines they need,” she said.

Recently, Singh handled the case of a little girl whose parents died of Covid-19, the father last year and the mother in April. The girl was taken in by her grandparents, who are in their 60s.

On one of her family visits to check on the girl’s welfare, Singh found the grandmother making a cheeni roti, a piece of flatbread stuffed with caramelised sugar, for her grandchild as a treat.

“This is why Protsahan is determined to make sure Covid-19 orphans do not end up in a state institution, but with family – even if the family isn’t perfect,” Singh said. “Even the best institution in the world on the best day cannot offer what this grandmother can.”