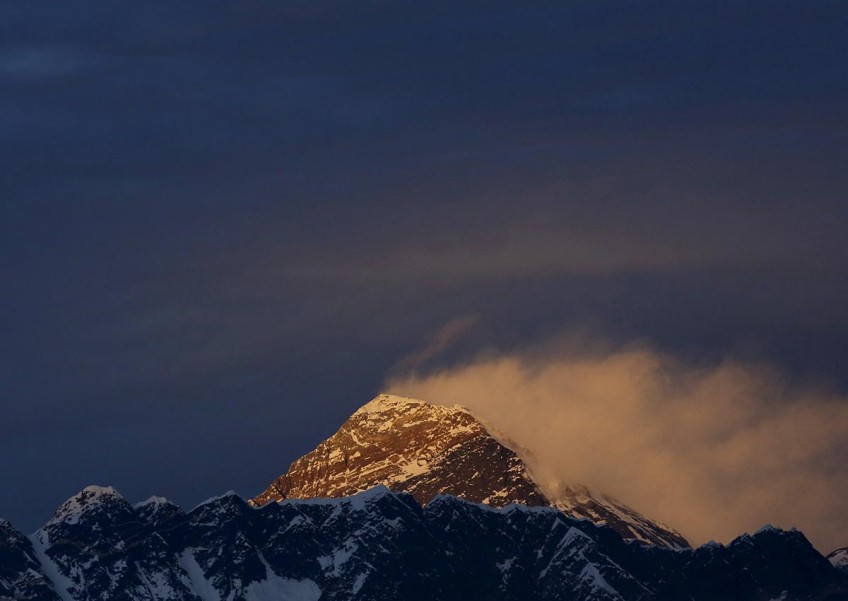 KATHMANDU - An Indian mountaineer has died on Mount Everest and two of his teammates are missing, expedition organisers said Monday, as the death toll from the Himalayan climbing season rose to five.

Subhash Pal reached the 8,848-metre (29,029-foot) summit on Saturday but collapsed while descending the Hillary Step ice wall and died the following day.

He was the third to die on Everest in recent days, after an Australian and a Dutch climber succumbed to altitude sickness. Another two climbers have died on other peaks.

"He died while the guides were bringing him down," said Loben Sherpa of Trekking Camp Nepal, which organised the Indian team's expedition to Mount Everest.

Expedition officials made contact with Pal and teammate Sunita Hazra on Sunday and helped them descend to Camp 3, but the whereabouts of the remaining two climbers are still unknown.

"Sunita has been rescued and brought to a hospital in Kathmandu for treatment. We still don't have any update on the missing two," said Sherpa.

Another Indian climber died after falling ill while descending from Mount Dhaulagiri in the Himalayas.

On Thursday a Nepali guide was killed when he slipped and fell 2,000 metres down Mount Lhotse, the world's fourth-highest peak.

The number of deaths brings the dangers into focus but is not unusual - according to the authoritative Himalayan Database, 34 people died on Everest in the five years to 2013.

As climbers ascend above 8,000 metres, they enter the "death zone" - notorious for its difficult terrain and thin air - where oxygen supplies fall to dangerously low levels and make mountaineers susceptible to altitude sickness.

"There are mixed feelings with the recent deaths, frostbite and rescues as it brings into focus the danger of climbing Everest," said veteran mountaineer and blogger Alan Arnette.

"However there is a sense of relief that in many ways, it was a 'normal' season." A tourism official said more than 30 climbers had been rescued this season after suffering altitude sickness or frostbite.

More than 350 climbers including 140 foreigners have successfully scaled Everest this season after two consecutive years of deadly disasters that led to almost all attempts being abandoned.

Since the first summit of the world's highest peak in 1953 more than 300 people have died on Everest and Lhotse, which share the same route until Camp 3 at 7,200 metres.

The last year in which no deaths were recorded on the mountain was 1977.

Despite the risks and recent disasters, Everest's allure remains undimmed, with Nepal issuing 289 permits to foreigners for this year's spring climbing season.

Hundreds of climbers fled Everest last year after an earthquake-triggered avalanche at base camp killed 18 people.

Only one climber reached the top in 2014 after an avalanche killed 16 Nepali guides that year.

Mountaineering is a major revenue-earner for impoverished Nepal. But last year's earthquake, which killed almost 9,000 people nationwide, threatened the future of the Himalayan nation's climbing and trekking industry.