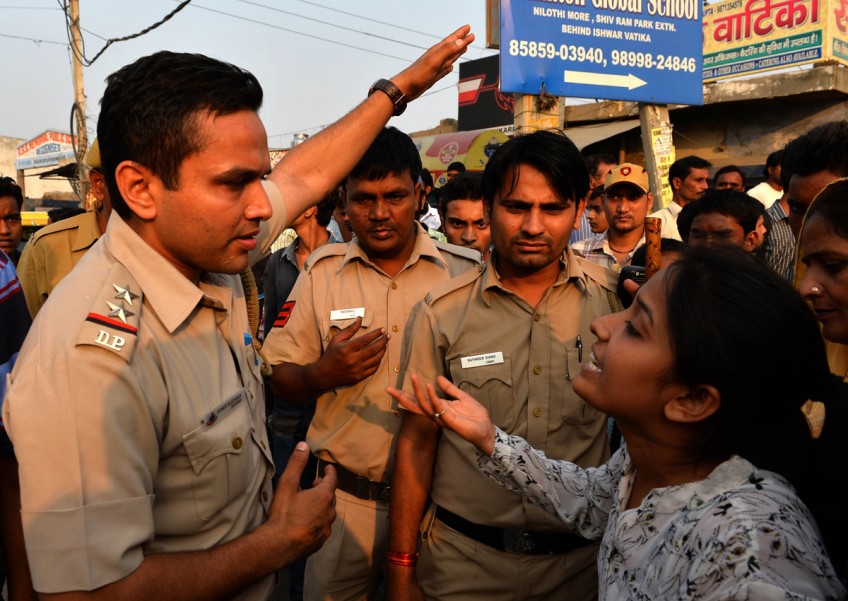 An Indian woman shouts at a police personnel during a protest near the home of a minor girl who was raped in New Delhi on Oct 17, 2015.
AFP

NEW DELHI - India police said Sunday they have arrested two teenagers over the rape of a toddler, the latest sexual assault on a child in the capital to ignite public anger.

Twenty police teams questioned more than 250 suspects before arresting the juveniles over the attack on the two-year-old girl, who was found bleeding in a park near her New Delhi home on Friday night.

"Delhi police have solved (the crime) by apprehending two juveniles in the rape case of a child," Dependra Pathak, a Delhi police commissioner, told reporters.

"Further investigation is on. All concerned evidences are been collected," Pathak said, adding that the two 17-year-olds arrested late on Saturday will face initial charges in 10 days.

Both boys lived in the same poor western neighbourhood as the toddler and one of them was known to her family, Pathak said.

The assault on the toddler, who is recovering in hospital, was the second within 24 hours after a five-year-old girl was gang-raped at a neighbour's house in east Delhi.

Three men have been arrested over that attack which also occurred on Friday evening, with both incidents sparking protests and renewed anger over sexual violence in the capital.

The attacks on the girls came a week after a four-year-old girl was raped, slashed with a knife and dumped by a railway track in Delhi.

They add to a grim record of sexual assaults in India. The fatal gang-rape of a student on a bus in Delhi in 2012 unleashed a wave of public outrage.

That incident prompted the national government to toughen punishments for rapists and overhaul policing to better protect women and children.

After neighbourhood protests on Saturday, small rallies were staged Sunday at police headquarters and the office of the city's chief minister Arvind Kejriwal, who has been blamed for failing to halt the attacks.

Kejriwal has pointed the finger at the national government, as both jostle for control of the capital's police department.

India recorded 36,735 rape cases in 2014 - 2,096 of them in Delhi. Experts say those figures likely under-represent the true scale of the crimes.