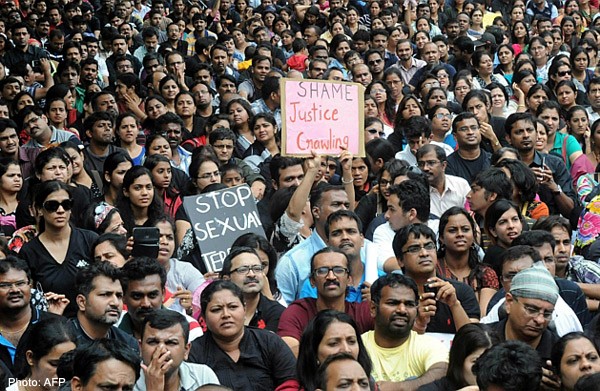 Indian parents of school children along with activists of various child rights organisations protest against school management over the recent sexual harassment of a 6-year-old schoolgirl, in Bangalore on July 19, 2014.

BANGALORE, India - Thousands of demonstrators marched Saturday to demand arrests in the case of a six-year-old girl allegedly raped in a school in the southern Indian city of Bangalore.

Two staff members at the private school are accused of the rape on July 2, the latest in a string of sexual attacks that have stirred national outrage in India.

Parents accused school authorities of trying to shield suspects and "hush up the criminal act".

"The school management is trying to protect the accused as it failed to register a case when the (child) told her class teacher," Nandish Reddy, a parent, told AFP.

"We have submitted a memorandum to the city police commissioner (Raghavendra Auradkar) seeking the arrest of the culprits," Reddy said.

The school, which cannot be named for legal reasons, has assured police of "full cooperation".

The protesters included parents from various schools around the high-tech city, including the one attended by the victim.

The demonstrators marched from the school where the rape allegedly happened to the police station in charge of the investigation.

The police commissioner appealed to the demonstrators to "have patience and bear with us".

"I request you to have faith in us. We are going to take action against the accused," Auradkar told the crowd.

Police have been "working 24x7 over the last four days to investigate the case", he said.

Indian authorities have become far more alert to sexual crimes since the 2012 brutal gang-rape and murder of a student in the national capital New Delhi.

"Schools must institute mechanisms that enable concrete pre-emptive steps to prevent such acts of violence, including by carrying out sensitisation and training programmes," said Tara Rao, director of Amnesty International India.

India's new prime minister, Narendra Modi, has promised "zero tolerance" toward crimes against women while parliament has toughened anti-rape laws to include the death penalty for some offences.

But violence against women is deeply engrained in some segments of Indian society, activists say, while government crime statistics show one rape is reported in the country of 1.2 billion people every 21 minutes.

In May, two teenaged girls were allegedly gang-raped and their bodies were found hanging from a tree the next day in a rural part of the sprawling northern Indian state of Uttar Pradesh.