According to the FAO, 1.3 billion tonnes of food are wasted every year around the globe

After a car accident in India paralysed his father in 2013, then-graduate student Somdip Dey emptied his savings to help his parents with medical bills. He turned to dumpster-diving to reduce living expenses, in addition to working part-time and studying at the University of Manchester.

As a hungry young man observing his fellow students discarding groceries, he felt heartsick. “Many students living in student accommodation who went home at the end of term would throw away their groceries, most of them still packed and in good condition, as they did not want to carry them home,” he said.

The period of frugality prompted him to deep-dive into reducing food waste with technology.

In 2014, Dey developed his first crowdsourced, food sharing platform. As part of a competing team in a global hackathon to devise innovative methods to reduce food waste, he recalls: “At that point, I really was not thinking of monetising because I knew what hunger felt like and simply wanted to fight food waste and help those in need.”

Dey, now a 31-year-old machine learning scientist with a PhD from the University of Essex, has taken his food sharing and waste prevention ideas further, with the co-development of Nosh, a data-driven app to reduce food waste and raise awareness about food sustainability.

According to the United Nations’ Food and Agriculture Organisation, 1.3 billion tonnes of food are wasted every year around the globe. Concurrently, a billion people go hungry every year. The food supply chain also accounts for an estimated 25 per cent of greenhouse gas emissions.

In a recent report by the charity Waste and Resources Action Programme (WRAP), in the UK alone, food waste from households and businesses is around 9.5 million tonnes: 70 per cent of which was intended to be consumed by people, and 30 per cent being “inedible” parts.

This had a value of over £19 billion (S$ 32 billion) a year, and would be associated with more than 25 Mt of greenhouse gas emissions. The food that could have been eaten would have made the equivalent of over 15 billion meals – enough to feed the entire UK population three meals a day for 11 weeks.

“Food waste is not only a social issue but a huge environmental issue,” Dey said.

On the app, users log their purchases and expiry dates of their food. The app then provides data-driven help in food inventory tracking and planning grocery shopping. 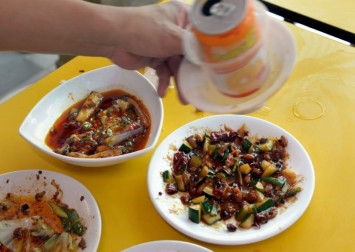 For example, bananas that are overripe can be used in smoothies and banana bread. News about food waste and sustainability are also provided under Nosh Daily on the app.

“Here [in the UK], anything that fails to meet any food safety specification is thrown out. Many expired foods or items with a ‘best before’ date, are only a measure of freshness and can still be consumed by those in need.”

He also highlighted the higher volume of food waste that resulted from the Covid-19 pandemic, as consumers purchased in bulk and more food with short shelf lives was wasted.

Dey identified the cause of food waste as “a disassociation between different stages of the food supply chain of farmers, retailers and consumers, whereby a restaurant knows its own food waste, but not food waste generated by its customers”.

Dey created Nosh to better identify food wasted at each stage of the supply chain with the help of artificial intelligence (AI) and technology.

Nosh is an AI-based, free app that launched in April 2020 and is available in 177 countries. Dey co-developed the app with Suman Saha, an engineer from Kolkata.

The duo also established Nosh Technologies in 2020, and is eyeing an India launch of a key feature of their app called Nosh Shop later this year. The feature allows consumers to buy about-to-expire products from local retailers at a discounted price.

“As a country becomes more prosperous and income levels rise, consumers are more concerned with convenience than sustainability. Food wastage is likely to be a major issue in India in the next five to 10 years,” said Dey.

Nosh Shop is the latest development from the app that lets retailers and restaurants sell their soon-to-expire food at discounts to consumers.

This service is only available in a handful of cities for now. Since February 2021, Nosh has saved 272,000 food items, mitigating about 138 tonnes of carbon emissions.

In 2021, Dey and scientists from Nosh Technologies and the University of Essex developed an intellectual property named FoodSQRBlock that utilises blockchain technology and QR codes to digitise food supply chain data. Dey is also on the MIT Technology Review’s ‘Innovators Under 35 Europe 2022’.

“What is one man’s rubbish is gold for the hungry. We should never forget that it is a privilege to have food on our tables.”