An Indian doctor examines patients inside a Covid-19 care centre.

Close on the heels of the "black fungus" infection that appeared in patients who had recovered from Covid-19, Indian doctors are seeing another serious coronavirus-related complication -cytomegalovirus infections (CMV), which are normally present in post-transplant patients or those whose immune systems have been weakened by cancer or Aids.

Seven cases have been detected in Mumbai, where former Covid-19 patients between the ages of 30 and 70 returned to hospital with symptoms of CMV pneumonia, which causes inflammation and fluid build-up in the lungs.

In New Delhi, all five CMV cases at Sir Ganga Ram Hospital involved severe gastrointestinal bleeding or intestinal obstruction. "Three of them had massive bleeding, one requiring emergency life-saving surgery in the form of the removal of the right side of the colon, while one of them succumbed," the hospital said in a statement.

Doctors at Sir Ganga Ram Hospital suspect that the steroids used to treat Covid-19 patients are responsible for most CMV cases by virtue of weakening the immune system. Steroids, along with high sugar levels triggered by their use, have also been a factor in black fungus cases.

However, Mumbai-based infectious diseases expert Dr Vasant Nagvekar said hospitals had to keep an eye out for all kinds of infections in post-Covid-19 patients.

“It’s not just steroids or diabetes alone – there is something about Covid-19 that suggests it is capable of severe immune suppression, allowing opportunistic infections to take hold,” he said.

Dr Able Lawrence, professor of immunology at the Sanjay Gandhi Postgraduate Institute of Medical Sciences in Lucknow, is not surprised that post-Covid-19 patients in Mumbai and Delhi are contracting CMV pneumonia.

The key, he said, was weakened immunity, as he had seen CMV cases in patients with autoimmune diseases such as lupus, or those with rheumatic diseases who were being treated with immunosuppressive drugs such as Rituximab.

“CMV can predispose patients to severe Covid-19, and Covid-19 can reactivate CMV. It’s a two-way ‘friendship’,” he said. “But what is reassuring is that CMV pneumonia can respond dramatically to treatment.”

The new complication comes while India is still battling black fungus. The country recorded close to 41,000 cases of the infection – known officially as mucormycosis – during the devastating second wave in April and May, according to official statistics.

However, some doctors have cautioned against linking disease outbreaks to Covid-19.

Read Also
After Covid-19, 'black fungus' robs some in India of their eyesight 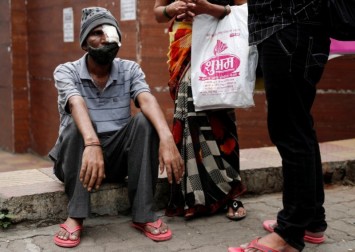 “Labelling everything neatly as a post-Covid-19 complication is not right,” said Dr Neeraj Nischal, assistant professor at the All India Institute of Medical Sciences in New Delhi, as quoted by The Indian Express. “By the end of the pandemic, millions of people are going to get Covid-19 and subsequently suffer from other medical conditions they might have had anyway. That does not mean everything is associated with [the disease].”

In other worrying news, 51 cases of the “Delta-plus” variant have been detected in recent weeks, with Indian scientists studying the strain to see if it is more contagious and causes worse symptoms.

First detected in Maharashtra state in late May, Delta-plus has been found in Jammu and Kashmir in the north and Kerala in the far south. One person in Madhya Pradesh has died of the mutation, despite being vaccinated.

The government is keeping a watchful eye on Delta-plus – all 12 states where it has been found have been told to step up testing and contract tracing to contain it.

Opinion among experts is divided. Some believe it does not seem more transmissible than the Delta variant. Others argue that since it has the mutation called K417N – present in the Beta variant, which was first found in South Africa – along with the known and deadly characteristics of the Delta strain, it might prove very dangerous. 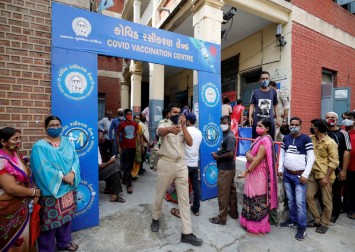 India’s second wave looks to be on the wane, with 48,786 new cases recorded on Wednesday – a sharp fall from the 400,000 per day recorded at the wave’s peak.

But positivity rates across states vary widely. Some, such as Kerala, continue to reel from high caseloads – the state of some 30 million people accounted for close to 28 per cent of Wednesday’s cases, while New Delhi’s population of 20 million saw just 101 cases.

This disparity has prompted warnings against complacency. “The second wave has not subsided. Eighty districts still have high positivity so there should not be any laxity,” said Dr Suneela Garg, who heads the New Delhi Covid-19 task force.