In Indonesia, anti-vaccine messages come with a dose of religion, anti-Chinese sentiment and conspiracy theories

Municipality workers carry a coffin from an ambulance to a burial area for victims of Covid-19 in Jakarta, Indonesia.

Anti-vaccine messages in Indonesia are often spread by religious micro-influencers and sprinkled with conspiracy theories, anti-government narrative and anti-Chinese sentiment, a new report has found, posing a challenge for the Southeast Asian nation's bid to speed up inoculations amid a surge in Covid-19 cases.

The report, written by Yatun Sastramidjaja and Amirul Adli Rosli at the ISEAS-Yusof Ishak Institute in Singapore, said the amount of anti-vaccine propaganda on social media platforms was "worrying".

Religious micro-influencers in Indonesia - those with a follower count of between 10,000 and 50,000 - "have the platform, the reach and the content-creating ability to spread their message to a large support base of faithful followers, whose trust in religious role models remains unshaken by censorship", it said.

The researchers monitored the hashtags #vaksin and #tolakvaksin - which respectively mean "vaccine" and "reject the vaccine" - posted by Indonesian users on TikTok in March and April.

The top video on the platform in March with the #vaksin hashtag was an edited clip of MP Ribka Tjiptaning - a member of the Indonesian Democratic Party of Struggle (PDI-P), to which President Joko Widodo also belongs - voicing her opposition to the country's inoculation programme and her doubts about the safety of the Covid-19 vaccine.

The clip was posted by an account named @adab.ulama, translating to "religious scholar conduct", which added a "dramatic Islamic song" to the clip of Ribka speaking - resulting in 1.6 million likes, 577,000 comments, and 51,600 shares, the report said. The video was removed by TikTok soon after it topped the list.

"Like TikTok and other social media platforms, the Indonesian government responds to Covid-19 misinformation by means of censorship and repression," the researchers said. 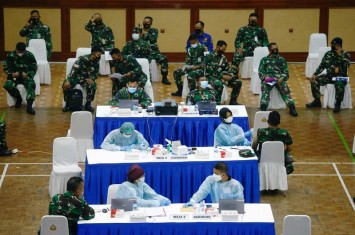 "But this heavy-handed approach does little to overcome vaccine hesitancy and leaves little room for addressing people's concerns. By marginalising or silencing anti-vaccine sentiments on social media, the government risks further alienating not only anti-vaxxer propagandists but also significant parts of the population that have these concerns."

Indeed, anti-vaccine propaganda is still proliferating on social media despite continuous efforts by the government and the platforms to block it.

This Week in Asia found a video on YouTube - posted earlier this month by a channel supporting the Islamic Defenders Front (FPI), a banned Islamic fundamentalist group - promoting conspiracy theories and anti-Semitic propaganda that had more than 230,000 views.

In the video, a cleric claimed that buying Chinese vaccines was embarrassing for Indonesia as their efficacy was still in doubt.

He also shared repeatedly debunked conspiracy theories that said the vaccines were "a tool by the Jewish to depopulate Muslims", and said the government had launched its vaccination programme because "Indonesia is indebted to capitalist countries". The video is still online.

"My Muslim brothers and sisters, we shall unite. We shall fight. Don't let them fool us," reads one comment on the video.

'Health is the issue in play'

Anti-vaccine conspiracy theories can also be found on Instagram, where This Week in Asia found a clip of a different cleric who said that anyone "will die between two or three years" after they were jabbed.

That video was originally posted by the same pro-FPI channel on YouTube and had garnered over 8,000 views on Instagram.

"Any issue in Indonesia can be used as an argument to attack the government. But unfortunately the issue that is in play now is health. This can influence people's willingness to get the vaccines," said Ika Karlina Idris, lecturer at the graduate school of communications at Paramadina University in Jakarta.

"The government should respond to the public's concerns about the vaccines, so they do not reach a misleading conclusion."

Concern about vaccine misinformation have also been voiced by Muhammadiyah, the country's second largest Muslim group.

"If the anti-vaccine, anti-Covid views continue to develop, the public will let down their guard, and health workers at the hospital will be overwhelmed. It's not impossible that [misinformation] will create disharmony among the people," Muhammadiyah chairman Haedar Nashir said on Wednesday. 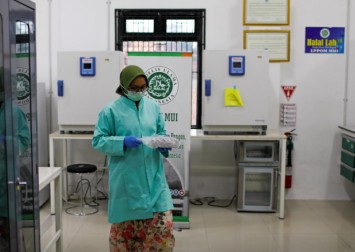 However, anti-vaccine sentiment was also partly sowed by the people's distrust towards the government's handling of the Covid-19 pandemic, he said.

"The government banned domestic travel but they still allowed tourist destinations to be opened. This underlines the discord between central and the local governments," Haedar said.

Anti-vaxxers also exploit anti-Chinese sentiment on Indonesian social media, saying that Chinese vaccines - like other China-made products - are of poor quality, according to Mafindo, a group that was established to fight misinformation and disinformation.

"Anything that China does or makes can be used as a hoax material. This anti-China sentiment is really easy to exploit," said Aribowo Sasmito, one of the group's founders.

According to the ISEAS-Yusof Ishak report, this "allows anti-vaccine propagandists to exploit the anti-Chinese sentiments traditionally nurtured among Indonesia's conservative Muslims, embellish fears about the 'foreign threat' posed by China to Indonesia's geopolitical and economic interests, and question the quality of 'second-rate' products made in China".

Indonesia has taken delivery of over 104 million vaccine doses, 94.5 million of which are the Chinese Sinovac vaccine, while the rest are the AstraZeneca and Sinopharm inoculations.

On Twitter, searching for the phrase "vaksin China" - or "Chinese vaccine" - brings up a Wednesday tweet from an anti-government account with over 24,000 followers that said "Chinese vaccines are dangerous as they are a biological weapon used to eradicate native Indonesians". 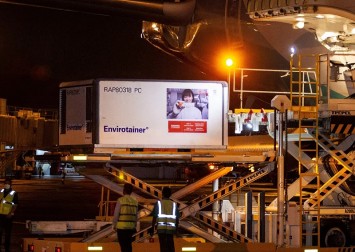 Ika of Paramadina University said anti-Chinese sentiment had been on the rise since the beginning of the pandemic in Indonesia, much like in the United States.

"Last year, negative stigma towards China and the Chinese was strong, triggered by the arrival of Chinese workers and tourists" before March, when Indonesia declared its first Covid-19 case, she said.

"Now, some people seem to believe that the pandemic is not real from seeing that China has gone back to normal, that it's already safe there, brushing off the fact that they had implemented strict lockdowns," she said.

Scepticism about the efficacy of Sinovac has been on the rise recently after Reuters reported that more than 350 health workers in Kudus, Central Java, contracted Covid-19 despite being fully vaccinated with it.

The Delta variant, which is believed to be more transmissible, has been detected widely among new infections. While most of the workers were asymptomatic, dozens were in hospital with high fevers and falling oxygen-saturation levels.

According to the Indonesian Medical Association (IDI), 61 doctors have died of Covid-19 between February and May - 10 of whom had been fully vaccinated with Sinovac, while four had received a single dose. Between June 1-24, 27 doctors had died from the disease, the IDI said on Friday, without disclosing how many had been vaccinated. 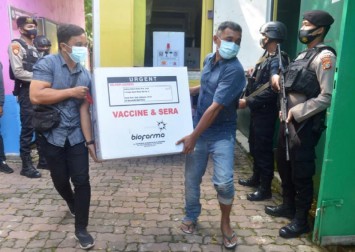 Responding to the Reuters report, Sinovac said its vaccines "cannot provide 100 per cent protection but could reduce severity and death", as quoted by Chinese state-backed tabloid Global Times.

A study by the school of public health at the University of Hong Kong recently found that levels of antibodies in people vaccinated with the German-made Pfizer-BioNTech vaccine were "substantially higher" than those jabbed with Sinovac.

The number of Covid-19 cases in Indonesia rose by one to 2,135,998 on Monday, while 423 more casualties brought the death toll to 57,561. Indonesia has the most coronavirus cases and deaths in Southeast Asia. The number of cases has tripled in the past three weeks.

In its latest situation report, the World Health Organisation recommended that Indonesian policymakers implement stringent measures such as movement restrictions and lockdowns "as quickly as possible", pointing to the "highly effective" lockdown that the Indian capital of New Delhi enforced from April 19.

The government last week tightened mobility restrictions in risky areas, brushing off the calls from health experts to implement a nationwide lockdown.

"[We have] decided that micro-scale public activity restrictions are the right policy, for now, to control Covid-19, as [the restrictions] can be implemented without killing the economy," President Widodo said in a news briefing on Wednesday.

The new restrictions, which will be in place until July 5, include a stipulation that all non-essential businesses in most risky places, or so called red zones, must close at 8pm; 75 per cent of employees must work from home; and a ban on religious and social gatherings.