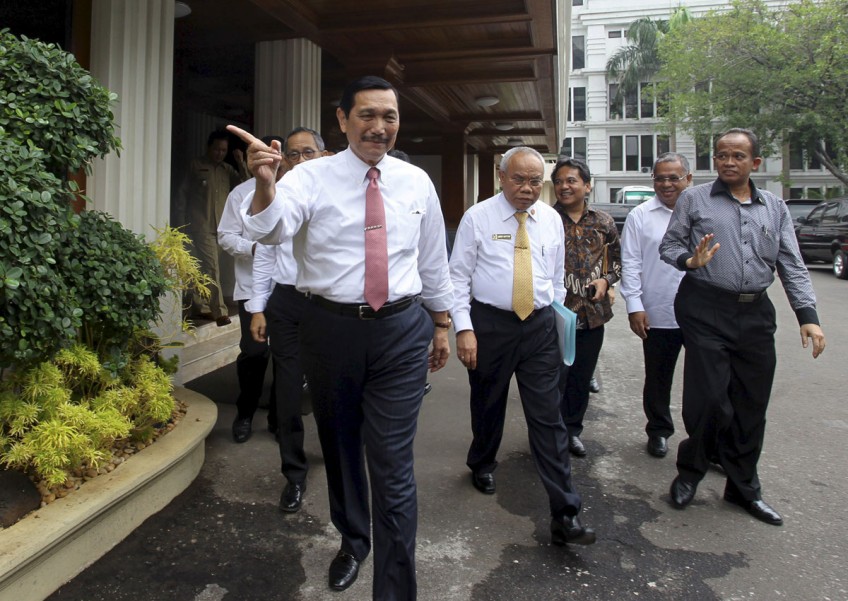 Mr Luhut Pandjaitan (centre) walking with officials to a news conference in Jakarta on Nov 19.
Reuters

Indonesia and Australia have agreed to resume co-operation on the sharing of intelligence information to fight terrorism and the illicit drug trade .

The decision was made during a visit to Sydney by Indonesia's top security minister Luhut Pandjaitan earlier this week where he was invited to be a guest speaker at a counter-terrorism seminar.

"We talked about how to deal with ISIS (the Islamic State in Iraq and Syria). We will work together to track the flows of funds used to support terrorism," Mr Luhut told The Straits Times on Thursday.

The two countries have also agreed to revive joint military exercises and the annual heads of state meeting.

Both were suspended after Australian intelligence tapped the cellphones of then President Susilo Bambang Yudhoyono, his wife and a number of top officials.

"The wiretapping incident had stopped the annual heads of state meeting," Mr Luhut said. "We want to revive this."

Indonesia's anti-money laundering agency will look into the possibility of illegal fund flows into Indonesia from Australia with suspected links to terrorist activities.

"We do not rule out there are ISIS sympathisers in Australia who are donating money to Indonesia," Mr Atmadji Sumarkidjo, an aide to and the spokesman for Mr Luhut, told The Straits Times.

He is operating in the forest in Poso, Central Sulawesi province, and Indonesia hopes to have him in custody by the end of January. Santoso has pledged allegiance to ISIS and is believed to be planning attacks in Indonesia.

During Mr Luhut's visit to Australia on Monday and Tuesday, talks on how to deal with asylum seekers were also held. Indonesia is open to setting aside an island to accommodate these refugees whose boats have been turned back to sea by Australia as they approached the coastal lines.

"We can talk and find a place for these refugees and plan to keep them in Indonesia for a predetermined period of time, not permanently," Mr Luhut told The Straits Times.

"But the costs should be borne by the Australians."

This article was first published on Nov 20, 2015.
Get a copy of The Straits Times or go to straitstimes.com for more stories.