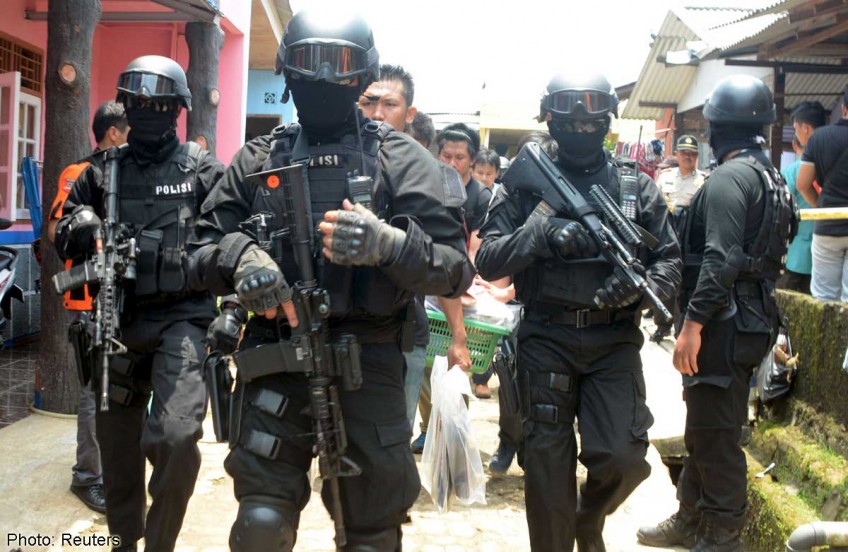 Armed anti-terror police walk ahead of guard officers carrying bags of evidence from the house of a man suspected of being involved in Islamic State-related activities in south Tangerang, Indonesia's Banten province, March 22, 2015.

JAKARTA - Indonesian anti-terror police have arrested five men who allegedly arranged for a group of mostly women and children to try and enter Syria to join the Islamic State (IS) group, an official said.

The 11 children, four women and one man, detained in the Turkish border town of Gaziantep, are the latest example of Indonesians heading to battlegrounds in the Middle East.

Fears have been growing about the influence of IS in Indonesia, which is the world's most populous Muslim-majority nation and has long struggled with Islamic militancy. Hundreds of Indonesians are feared to have joined the jihadists.

In a series of raids in and around Jakarta at the weekend, elite anti-terror police rounded up the five men, who are suspected of helping the 16 people who were recently caught.

The men are accused of involvement in "coaching, guidance, and recruitment of sympathisers of IS to depart to Iraq and Syria... and the collection and distribution of funds for the activities of IS volunteers in Indonesia," said national police spokesman Rikwanto, who goes by one name, late Sunday.

Four were charged specifically with helping arrange documents for the group to depart for Turkey, as well as previously helping another 21 Indonesians who went to join IS.

One of the suspects faced a separate charge of urging people to join IS on his website, as well as creating and uploading a video online of children being trained by the jihadists.

Police did not name any of the suspects.

They also confiscated items including nine mobile phones, eight million rupiah ($600) and $5,300 in US dollars.

The 16 recently arrested are still in detention in Turkey.

Jakarta has already banned support for IS, which controls vast swathes of territory in Iraq and Syria, although experts have called on authorities to take further steps to stop the flow of fighters.

Indonesia has waged a crackdown on Islamic militant groups for more than a decade following attacks on Western targets, including the 2002 Bali bombings that killed 202 people. The campaign has been credited with weakening key networks.