JAKARTA/AMED, Indonesia - Indonesia's transportation ministry said on Tuesday it will extend the closure of Bali's I Gusti Ngurah Rai International Airport for a further 24 hours because of ash from the eruption of the island's Mount Agung volcano.

A report from local aviation navigation authorities showed that "aircraft flight channels are covered with volcanic ash" the ministry said in a statement.

Ten alternative airports have been prepared for airlines to divert inbound flights, including in neighbouring provinces. 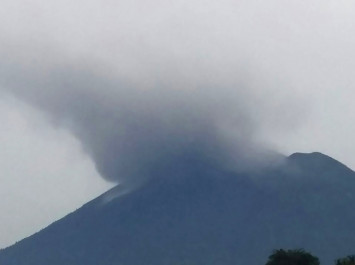 A separate notice showed Lombok airport had been reopened, after an earlier closure overnight due to the eruption.

Agung rises majestically over eastern Bali to a height of just over 3,000 metres (9,800 feet).

On Monday, authorities ordered 100,000 residents living near the volcano to evacuate immediately, warning that the first major eruption in 54 years could be "imminent". An 8-10 km (5-6 miles) exclusion zone has been imposed around the summit.

On Tuesday, life continued largely as normal in villages surrounding Agung, with residents setting up traditional markets and offering prayers as the volcano continued to spew tall columns of ash and smoke from its crater.

Many residents evacuated in September when the alert was last raised to the highest level have returned to their homes and farms due to worries over their livelihood and livestock.

Indonesia's Volcanology and Geological Disaster Mitigation Centre (PVMBG), which is using drones, satellite imagery and other equipment, said predictions were difficult in the absence of instrumental recordings from the last eruption 54 years ago.

It warned that if a similar eruption occurred, it could send rocks bigger than fist-size up to 8 km (5 miles) from the summit and volcanic gas a distance of 10 km (6 miles) within three minutes.

Recordings now show the northeast area of Agung's peak has swollen in recent weeks "indicating there is fairly strong pressure toward the surface", PVMBG said.