The National Police have arrested and named businessman Kusmianto, aka Lim Swie King or Aan, a suspect for allegedly attempting to smuggle 73,200 lobster seeds.

According to the police, Kusmianto had obtained a capture permit but the objects he had captured violated the requirement set under a 2020 maritime affairs and fisheries ministerial regulation.

Syahardiantono added that the suspect had initially attempted to smuggle the lobster seeds to Singapore without a business permit and certificate of origin, Antara reported.

"The police have the authority to handle fisheries crime, especially in relation to lobster seed [smuggling]," he said.

He went on to say that the case dossier had been completed and would soon be handed over to prosecutors.

"The case is being handled under the jurisdiction of the Jambi Police and the East Java Police." 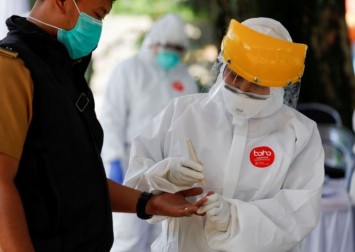 Among the seized lobster seeds, 44,000 have been released by the National Fish Quarantine, Quality Control and Fisheries Products Safety Agency (BKIPM) into the Carita waters in Banten province.

Meanwhile, 29,000 seeds have been handed over for research by the Maritime Affairs and Fisheries Ministry and 200 seeds will be used as evidence in court.

The name Lim Swie King aka Kusmianto has caused confusion among the public and social media users, who thought the suspect was legendary badminton athlete Liem Swie King.

Police spokesperson Argo Yuwono confirmed with The Jakarta Post that the suspect had a similar name but had no relation to the retired athlete.