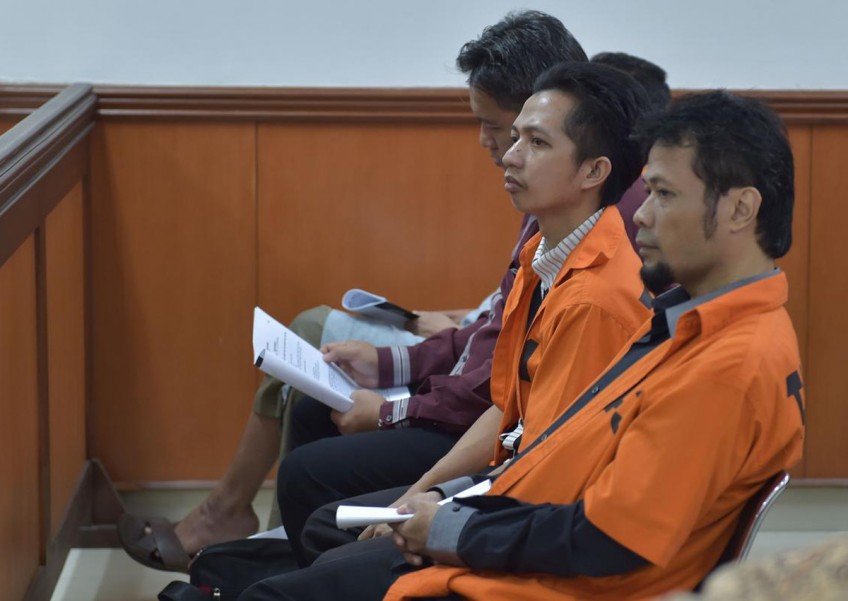 Indonesian meatball seller Ahmad Junaedi waiting in a court room prior to his trial. He was drawn to the Islamic State group by the promise of a high salary, but quickly became disillusioned.
AFP

JAKARTA - Indonesian meatball seller Ahmad Junaedi was drawn to the Islamic State group in Syria by the promise of a high salary to pay off his debts and a desire to help children living in the jihadists' "caliphate".

But the 32-year-old villager from Java island quickly became disillusioned - bored with his job making kebabs for Arab fighters, disappointed at the low pay and upset at tales of the group's brutal violence.

The father-of-four eventually persuaded his commanders to let him go home, joining a growing number of disenchanted people leaving the jihadists, a trend experts say could give governments a new weapon to deter potential recruits.

"I was deceived," Junaedi, who was also an imam at a mosque in his village, told AFP during a recent interview near Jakarta, under heavy guard by the country's counter-terror agency. "It was boring there and all the promises were lies." "Also, I know that in Islam we say 'an eye for an eye', but what they did there was much more than that - it is a violation of what religion teaches us," he added.

Junaedi was arrested in March this year, several months after his return. He went on trial this week in Jakarta and is likely to be jailed.

Indonesia, the world's most populous Muslim-majority nation, has a long history of struggling with Islamic militancy and has suffered a string of attacks in the past 15 years, including the 2002 Bali bombings that killed 202 people, mostly foreign tourists.

While a crackdown has been largely successful and there have been no major attacks since 2009, the emergence of IS has sparked alarm. Authorities say that over 250 Indonesians have headed to the Middle East to join the group, raising fears they could revive militant networks on their return.

However the country's counter-terror chiefs see a silver lining to the handful of former IS members returning disenchanted - they are hopeful that stories of misery and disappointment can deter potential recruits.

This approach was put forward in a report last month by the International Centre for the Study of Radicalisation and Political Violence at King's College London, which found a growing number of "disillusioned" Islamic State fighters from a range of countries had defected.

Junaedi featured among 58 people listed in the report as having publicly spoken out about their defection since January 2014. Like him, some were disappointed that promises of generous financial rewards had failed to materialise, and were upset by the killing of fellow Muslims.

The most recent returnees were a man from West Java province and his four-year-old son, according to Nasution. The man had been heading to work on an IS oil field after being promised a hefty salary but eventually turned himself in after failing to cross from Turkey to Syria.

Junaedi's story echoes that of other low-income Indonesians drawn to IS.

He was alarmed by pictures on social media of wounded children in IS-held areas of Syria and encouraged by sermons in mosques supporting the jihadists. In March 2014, he was approached by a recruiter who promised he could pay off his nine million rupiah (S$900) debt with just a few days work.

Like others who joined the jihadists, who have taken over vast swathes of territory in Syria and Iraq and declared a "caliphate", he travelled overland from Turkey and ended up in a village near Syria's second city of Aleppo.

His main work was preparing food for fighters, but he also stood guard at the village and sometimes helped with teaching children.

But he was disappointed with the salary - the equivalent of just $50 month - and found the day-to-day life in the village, which was not the site of major fighting, monotonous.

He was also horrified at tales of the jihadists' brutality - IS has beheaded several foreign captives - but claims to have seen little first-hand.

After three months, the regional IS commander agreed to let him leave, but with a warning that he would be killed if he returned.

"To Indonesians who want to go but have only heard about the situation in Syria, think again, because you will be sorry," Junaedi said.

Despite such stories, authorities believe there is still a high risk of Indonesians joining IS, with Jakarta-based terrorism expert Sidney Jones warning that social media is playing a key role.

"Often these pictures of triumphant fighters, all smiles with their rifles and sophisticated weapons and so on, that can be a very powerful tool for attracting people," she told AFP.

Experts also worry that current Indonesian laws are not adequate to tackle the threat of IS.

Nasution describes the battle against the group's propaganda as a "war of ideologies".

He recalls how Indonesians who trained with Islamic militants in Afghanistan in the 1990s came back and launched terror attacks, including the Bali bombings.

"(The radicals) are underground preparing, and sending people to Syria to train there," he said. "This is far from over."