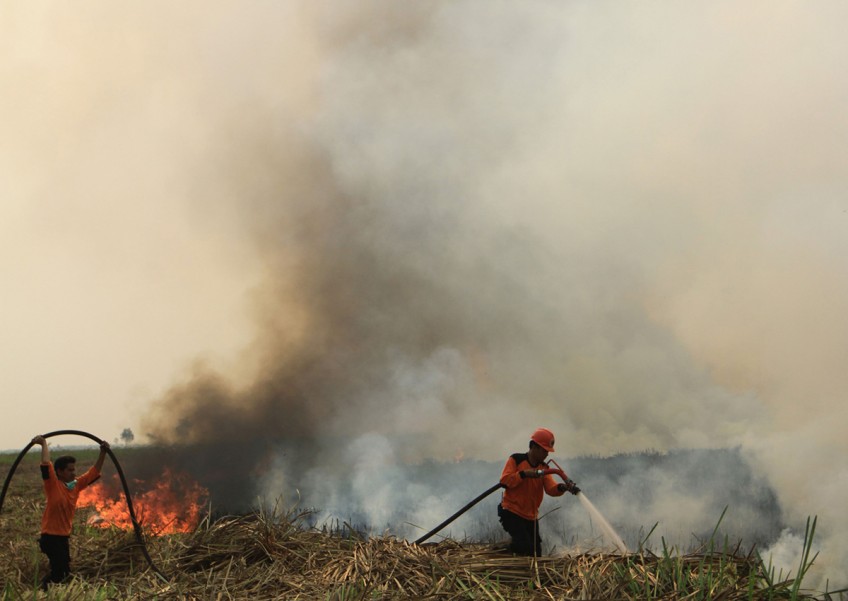 According to Siti, this year's land and forest fires in Riau have been far fewer than in previous years, and the smoke currently blanketing Riau is largely from fires in Jambi and South Sumatra.

"It seems that Kalimantan and southern Sumatra are chasing each other on the emergence of hot spots. That's why we are focusing our attention on those two areas," said Siti, speaking on the sidelines of a two-day visit to Riau, which ended on Sunday.

Siti said the government would not let up on its efforts to investigate environmental damage caused by fires from land clearing, which allegedly implicates several plantation companies in Riau.

The Environment and Forestry Ministry, she added, had dispatched at least 70 environment surveillance officials (PPLH), 116 forest ecosystem controllers and 48 forest rangers (Polhut) to Riau to analyse the level of violations committed by companies.

"The results of the analysis will determine what kind of sanctions we will impose on the companies, whether we only need to impose administrative sanctions or if we have to freeze the permits of companies proven to have committed legal violations," said Siti.

The minister said her visit to Riau was aimed at ensuring that companies proven guilty of legal violations would be sanctioned immediately.

"By the end of this year at the latest, all land problems in Riau must be completely resolved," she said.

Citing official data, Siti said 276 companies had been involved in land-burning cases in several areas across Indonesia, 147 of which had obtained land-management permits from institutions other than the Environment and Forestry Ministry.

"Those who damage the environment will get similar sanctions. The public are fed up with seeing companies that violate the law given warnings only," said Siti.

Slash-and-burn land clearing practices are widely seen as a major cause of land and forest fires in Riau.

Nonetheless, Siti said the government did not intend to change an existing regulation allowing people with 2 hectares of land to clear their land using slash-and-burn.

"This traditional method of land-clearing has been in practice across the globe since the era of the nomads. If we change the regulation without a proper study, we run the risk of affecting people's livelihoods," the minister said.

"One thing we need to do is ensure that the implementation of slash-and-burn clearing methods does not violate legal requirements," she added.

The government might, Siti went on, seek to deter the use of fire to clear land by offering economic incentives.