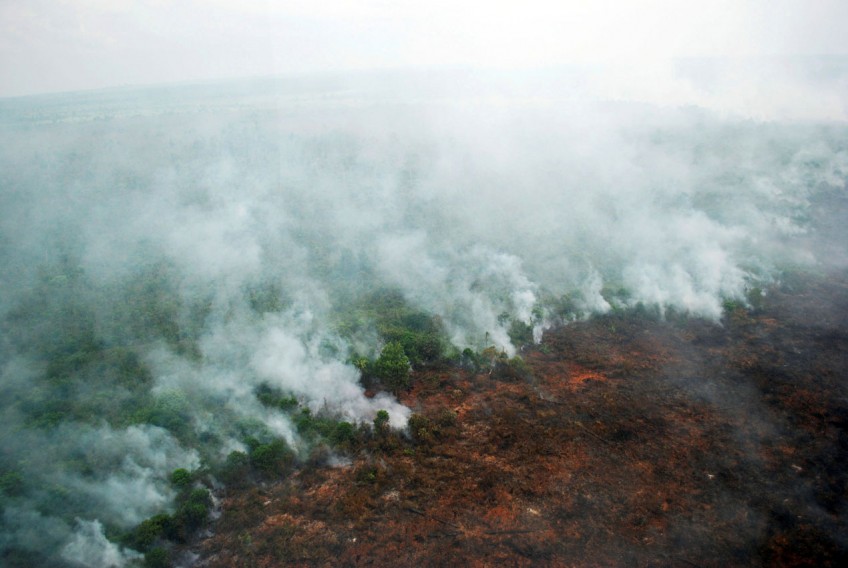 A forest fire is seen burning from a helicopter belonging to the Indonesian National Board of Disaster Management (BNPB) in Pelalawan, Riau province, Sumatra island, Indonesia June 10, 2016.
Reuters

Indonesia is planning a hi-tech monitoring network to protect peatland at the centre of last year's raging fires that cloaked Southeast Asia in toxic haze, a senior official said.

The fires sent smog billowing across the region in September and October, disrupting the daily lives of tens of millions and fuelling anger at Indonesia for its failure to tackle the crisis.

The blazes and resulting haze, caused by illegal slash-and-burn land clearance, are an annual occurrence. But the fires in 2015 were the worst for years as an El Nino weather phenomenon created tinder-dry conditions.

The hardest-hit areas were peatland on Sumatra island and the Indonesian part of Borneo, which become highly flammable after being cleared of vegetation and drained to make way for palm oil and pulpwood plantations.

Jakarta in January set up an agency to oversee the restoration of 2.6 million hectares (6.4 million acres) - roughly the size of Rwanda - of peat in the next five years to try to prevent future fires.

It is part of a broader push to stop a repeat of the devastating blazes. President Joko Widodo has introduced other measures to protect peatland and banned the use of new land for palm oil operations.

Monitoring devices will be installed in the peat to ensure restoration is being properly carried out, said Peatland Restoration Agency head Nazir Foead.

"We are going to install monitoring tools, sensors, that will send us the data real time through the Internet so companies are fully aware that their restoration action is being monitored," he told AFP in an interview on Tuesday.

Roughly half the peat earmarked for restoration is on companies' concession land and they are responsible for carrying out the improvement work, with guidance from the agency.

The agency will restore peat on government- and community-owned land.

The monitoring stations will include an underground sensor and rain gauge to check if peat is retaining water after rainfall, allowing authorities to work out whether drainage canals have been properly closed off.

The sensors will send regular updates to a control centre near Jakarta which is linked to government departments, Foead said. A test monitoring device was installed on Sumatra last month and the agency hopes eventually to have hundreds across the country.

Foead conceded that only "very small steps" had been taken so far in restoring peat, but was optimistic the body would be able to fulfil its task. He said he did not believe 2016 would see a repeat of last year's fires as authorities were better prepared.