JAKARTA - Indonesian President Joko Widodo was 13 percentage points ahead on Wednesday in the race to lead the world's third-largest democracy, based on 51 per cent of votes counted, an unofficial early count of votes by pollster CSIS showed.

Widodo is running against former military general Prabowo Subianto after a six-month campaign dominated by economic issues and the rising influence of political Islam.

The incumbent had 56.7 per cent of votes, while Prabowo had 43.3 per cent, the Center for Strategic and International Studies (CSIS) said.

CSIS is one of more than 40 groups accredited by Indonesia's election panel to conduct unofficial quick counts, based on samples from polling stations nationwide.

Read Also
Indonesia election: who will win between Joko Widodo and Prabowo Subianto? 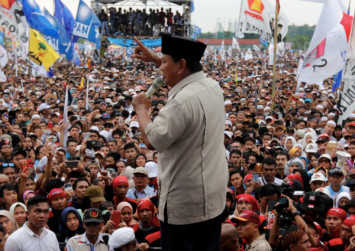 Such counts by reputable companies have proved accurate in previous elections.

Tens of millions of Indonesians voted on Wednesday in the world's biggest one-day election to choose a president and representatives to national and regional level legislative assemblies.