No slacking: Officers of a joint security task force hand a face mask to a pedestrian at the Slipi-Petamburan intersection in West Jakarta on Sept 10 as part of a campaign to contain the spread of Covid-19.

Members of the public across the country have been left puzzled by health protocol regulations issued by authorities, especially regarding the use of face masks in private vehicles.

A video showing a woman complaining about being punished by authorities for not wearing a face mask properly inside her car recently went viral on social media. She claimed she was stopped by the police for pulling down her mask for a few seconds to breathe while driving.

She criticised the punishment imposed by the officials, who required her to wait in line with other violators before eventually undergoing a quick trial to determine her punishment.

“They don’t maintain physical distance. It’s really not right because I’m healthy and going along in my car. Now they have stopped me and asked me to wait next to strangers whose [health] conditions I don’t know about,” she says in the footage.

A motorcyclist in Pasar Minggu, South Jakarta became enraged on Thursday when authorities stopped her for not wearing her mask properly.

She refused to be sanctioned as she claimed she only pulled down her mask temporarily to call her son, so she could speak more clearly.

“It’s not that I don’t wear mask. I do,” she said, as quoted by kompas.com . She added that the officials should also have punished the people around her, who she said were not maintaining physical distance, among other transgressions.

On Monday, the National Police launched a national operation, dubbed Operasi Yustisi , to crack down on health protocol violators. The police were cooperating with the Indonesian Military and local public order agencies (Satpol PP). 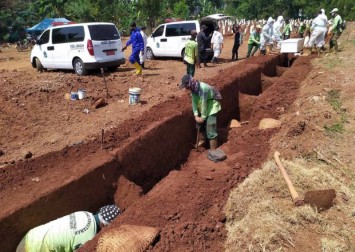 During the operation, officials put violators through a quick trial to determine a punishment for them in tents set up on the side of the streets.

The types of violations and the corresponding punishments varied from one region to another, depending on regulations issued by local administrations.

Jakarta, for example, requires all residents to wear a mask at all times while going out, including in private vehicles, according to Jakarta Gubernatorial Regulation No. 88/2020.

In East Java, a 2020 gubernatorial regulation only stipulates that residents are required to wear a face mask while leaving their homes or interacting with other people whose health status is unknown.

It does not mention specifically whether private vehicle users are required to wear a mask.

A driver in Madiun, East Java, identified only as AI, told authorities that she did not know she was required to wear a mask inside her car, as reported by kompas.com. 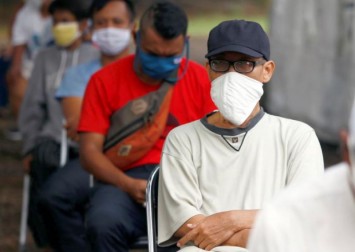 Another driver, identified only as AN, got into an argument with authorities, as she refused to be punished for wearing a face mask improperly while driving. She claimed her mask was loose so it slipped down to her chin on its own.

"I didn't do it on purpose, I was driving [so I could not fix it]," she told the judge, who eventually ordered her to pay a fine.

I Gusti Agung Ketut Suryanegara, the head of the Badung Satpol PP in Bali, said many foreign tourists were upset when authorities punished them for not wearing a mask while riding or driving.

“They thought they did not have to wear a mask in their car or on their motorcycle because they wore a helmet,” Suryanegara said, as quoted by kompas.com .

Bali Gubernatorial Regulation No. 46/2020 on Covid-19 health protocols does not stipulate a requirement for drivers or riders to wear a mask while driving or riding their vehicles.