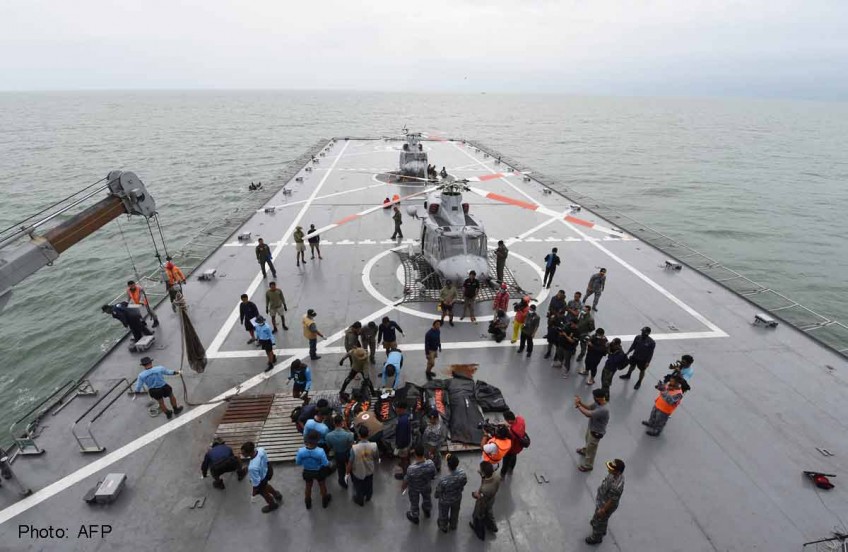 The Indonesia AirAsia Airbus A320-200 plunged into the Java Sea on Sunday while en route from Indonesia's second-biggest city Surabaya to Singapore with 162 people on board. No survivors have been found.

PANGKALAN BUN, Indonesia - Indonesia pledged Saturday to investigate flight violations by AirAsia, as search teams found two big parts of the airline's plane that crashed into the sea last weekend with 162 people on board.

The country's transport ministry said the ill-fated aircraft had been flying on an unauthorised schedule when it crashed, and the airline has now been suspended from flying the route from the city of Surabaya to Singapore.

"It violated the route permit given, the schedule given, that's the problem," director general of air transport, Djoko Murjatmodjo, told AFP.

He said AirAsia's permit for the route would be suspended until investigations were completed, while other airlines in the country would also be examined.

"We will carry out an audit or an evaluation on all airlines in Indonesia over whether there are any violations related to route, time and schedule," he said.

Major parts of the Airbus A320-200 were found in the Java Sea off the island of Borneo late Friday night, raising hopes that the remaining bodies and the black box recorders, crucial to determining the cause of the crash, would soon be located.

So far recovery teams have found 30 bodies of those killed when Flight 8501 went down early Sunday during a storm, and search leaders were sending divers to the spot where plane parts had been found to try to recover the remaining bodies.

"With the discovery of an oil spill and two big parts of the aircraft, I can assure you these are the parts of the AirAsia plane we have been looking for," search and rescue agency chief Bambang Soelistyo told reporters.

"The main focus today is to find and evacuate victims." A statement from transport ministry spokesman J.A. Barata said AirAsia Indonesia had not been permitted to fly the Surabaya-Singapore route on Sundays and had not asked to change its schedule.

It was unclear how the airline, a unit of Malaysia-based AirAsia, had been able to fly without the necessary authorisation.

AirAsia Indonesia chief Sunu Widyatmoko told reporters that the company would not comment until the results of the investigation were known, adding that the airline would "fully cooperate with the government in that evaluation process".

Recovery teams, which have been hampered by rough weather in recent days, had on Friday narrowed their search to an area of 45 by 35 nautical miles centred about 75 nautical miles southwest of Pangkalan Bun, a town in Central Kalimantan on Borneo.

Search official S.B. Supriyadi in Pangkalan Bun said their Saturday operation would also comb coastal areas to see if bodies had drifted to shore, while their ability to send divers down would depend on sea currents and waves.

Russia has sent in dozens of search and rescue workers to help with the operations, as well as two planes, one amphibious, while French and Singaporean investigators are helping to locate the black boxes.

The United States, Australia, South Korea and Malaysia are among other countries helping in the search effort.

Soelistyo said the larger of the two objects found on Friday night was about 10 metres by five metres (32 feet by 16 feet).

A presentation shown to reporters described one of the pieces a "suspected tail" of the plane.

"As I speak we are lowering an ROV (remotely operated underwater vehicle) underwater to get an actual picture of the objects detected on the sea floor. All are at the depth of 30 metres," Soelistyo said.

He added however that the strong current was making it difficult to operate the ROV.

Toos Sanitioso, an investigator from the KNKT (National Transportation Safety Committee), said he was hopeful they would find the black boxes in a few days.

"It seems that they have found the major (plane) parts," he told reporters in Surabaya, Indonesia's second-largest city.

The families of victims have been preparing funerals as the bodies recovered are identified in Surabaya, where a crisis centre has been set up at a police hospital with facilities to store 150 bodies.

Of the 162 passengers and crew on board, 155 were Indonesian, with three South Koreans, one Singaporean, one Malaysian, one Briton and a Frenchman - co-pilot Remi Plesel.

Ongko Gunawan, who lost his sister and brother-in-law and their child, expressed impatience as he waited for news.

"We are exhausted and sick of it. Hopefully we can find the bodies quickly, now that there's also help from the foreign countries," he said.

Before take-off, the pilot of Flight 8501 had asked for permission to fly at a higher altitude to avoid a storm, but the request was not approved due to other planes above him on the popular route, according to AirNav, Indonesia's air traffic control.

In his last communication shortly before all contact was lost, he said he wanted to change course to avoid the menacing storm system.