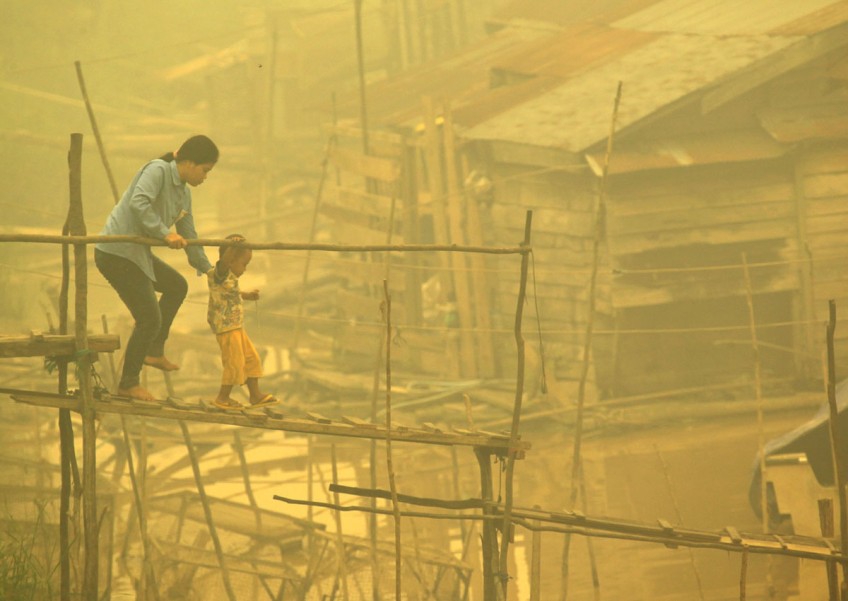 A massive operation, both on land and at sea, is under way to prepare for what appears to be an imminent evacuation of thousands of babies and children from their homes in parts of Sumatra and Kalimantan.

This, as forest fires, which produce the toxic haze, continue to burn unabated despite the extensive firefighting resources dedicated to putting them out.

Indonesia yesterday put six navy ships on high alert off the waters of the two regions, which have been the worst hit by thick smoke from forest and peatland fires this year.

Together with a fleet of vessels from state-owned shipping firm PT Pelayaran Nasional Indonesia, they form the last resort in the event that cities need to be evacuated after being rendered unliveable owing to high levels of air pollution.

"We are doing this by way of a military operation for the sake of humanity," said Coordinating Minister for Political, Legal and Security Affairs Luhut Pandjaitan.

Air pollution levels continued to soar in Sumatra and Kalimantan, with the Pollutant Standards Index (PSI) in various areas in the two regions hovering within the "hazardous" zone for most of this week.

Yesterday, the PSI for Palangkaraya in Central Kalimantan jumped off the charts on Indonesia's Meteorology, Climatology and Geophysics Agency website, which has a maximum reading of 2,000 PSI. It peaked at 2,251 PSI at 4pm and never went below 1,045 PSI. In Jambi, Central Sumatra, the PSI peaked at 914 but fell to 531 at 6pm.

In Indonesia, anything above 350 is deemed hazardous.

The haze, exacerbated by an extended dry spell, has affected millions across South-east Asia.

In Thailand yesterday, air pollutant levels stayed in the unhealthy range although they dipped from the day before, when parts of the south saw the worst haze in years.

In Malaysia, schools were allowed to reopen yesterday except for those in Perlis, Perak and Penang, where pollution continues to worsen.

At least eight airports across the Philippines have grounded planes without instruments that will allow pilots to land and take off in low to near-zero visibility.

As a humanitarian crisis looms in Indonesia, Mr Luhut said measures to alleviate the suffering of people affected by the haze will be prioritised for infants and children.

At least four babies and a young child have died after suffering from lung infections, while more than 450,000 people have suffered from haze-related illnesses.

Mr Luhut said he is requesting more waterbombers to join the multinational assistance team fighting the fires. "We have secured nine (of the initial 15 aircraft planned) and they will be operational in 10 days or earlier," he said.

"We are also approaching Canada, the US and France (for help)."

Top on Indonesia's wishlist is still the Russian-made Beriev Be-200, capable of hauling 12,000 litres of water. "If we can get another five, that would be good," said Mr Luhut.

He was speaking to the press after a meeting with President Joko Widodo at the Presidential Palace to finalise the emergency plans yesterday.

Coordinating Minister for Human Development and Culture Puan Maharani, who was also at the meeting, added that emergency shelters, complete with air purifiers, are being set up at public buildings across Indonesia to offer refuge for people affected by the haze.

These are meant to be the first gathering sites in the event that conditions worsen, or for people who refuse to evacuate to the ships or cannot make it out to sea, added Mr Luhut.

"We have taken measures, but it is impossible to put out the fires over the next one to three weeks as our efforts should go hand in hand with rain."