A healthcare worker wearing personal protective equipment (PPE) takes a swab sample to test for the coronavirus disease (Covid-19) at a drive-through testing site in Jakarta, Indonesia, on Dec 16, 2021.

Health experts have urged Indonesia to reimplement stricter coronavirus curbs as a top official warns the country could see the latest wave, driven by Omicron subvariants, peak in the second or third week of July.

Health Minister Budi Gunadi Sadikin made the prediction on Sunday (June 26), based on the virus' transmission pattern in South Africa, the first country that reported the emergence of the Omicron subvariants BA.4 and BA.5.

If the same infection rate applies in Indonesia, the country would see around "17,000 or 18,000" daily cases during the peak before the wave flattens, Budi said.

"But the number of hospitalisations and fatalities will be far lower than the previous waves," he added.

Southeast Asia's biggest economy has persistently recorded an increase in new Covid-19 infections in the past weeks, recording 2,167 daily cases on Tuesday, the highest since early April.

Since Friday, Indonesia has also seen at least 143 cases of Omicron BA.4 and BA.5, though health experts warned that this number was only "the tip of the iceberg" due to lack of testing and tracing, a fundamental problem the country has had since the pandemic was declared more than two years ago.

Some provinces, such as Jakarta and Banten, have recorded a positivity rate beyond the World Health Organisation's standard of five per cent, which dictates that any rate below it means that the pandemic is under control. However, minister Budi has claimed that Indonesia's national Covid-19 positivity rate is currently tracked at 3.61 per cent.

"We do see an increase of daily cases, from 200 to around 2,000 daily cases, at the moment. But during the peak of previous waves, the daily cases in Indonesia reached up to 60,000 cases per day," Budi said, adding that the public should remain calm and stay alert during the current wave.

To anticipate the incoming wave, he also urged the government to speed up booster shots as many people's immunity against Covid-19 may have waned.

Omicron subvariants BA.4 and BA.5 are reportedly able to elude antibody responses among people who have had previous Covid-19 infection and those who are fully vaccinated and boosted. But vaccinated people remain protected against severe Covid-19 symptoms, health experts said.

"Now we are seeing that, on the ground, there is a minimum enforcement and monitoring of health protocols. We are seeing this in public transport and shopping centres such as malls. People used to check-in and screen themselves using the PeduliLindungi app in public places but this [practice] is no longer strictly monitored," Hermawan said.

"The slow rate of vaccination will also impact [our preparedness in facing the next wave]. Many people's protection has waned as their last shot was around four or six months ago," he added.

Dicky Budiman, epidemiologist at Griffith University in Australia, said that Omicron subvariants BA.4 and BA.5 were not as "severe and fatal" compared with the Delta variant that brought Indonesia's health system to its knees last summer. 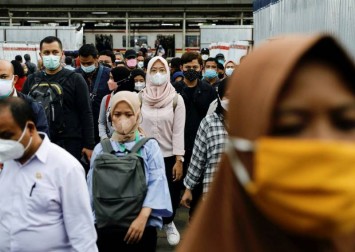 Dicky, who predicted that Indonesia's fourth wave would only reach its peak in the fourth week of July, said the number of BA.4 and BA.5 cases may be higher than official reports due to lack of testing.

Dicky also said the regions with low vaccination rates and those that were not severely impacted by the Delta variant may be overwhelmed next month, as the fourth wave peaks.

"Java and Bali islands also still need to be cautious as they have a high population of the elderly, who are vulnerable to the virus, and they could potentially be burdening the health facilities that could lead to death in some cases," he said.

Dicky argued that Jakarta was unlikely to impose strict lockdowns despite seeing an increase of daily cases, as it is "an unpopular policy, from the economic, political, and sociocultural perspectives".

He suggested that the government pursue a "more feasible and effective strategy" by expediting the roll-out of booster jabs.

"At least 50 per cent of the total population, and 70 per cent of people in the high-risk group, should have gotten their booster shots before the end of the year," Dicky said.

Both experts also urged Indonesians to adhere to the Covid-19 health protocols, whose implementation have been laxed in the past months following the Omicron-driven third wave earlier this year.

While a hard lockdown like the one seen in China is unlikely to be imposed in Indonesia, Coordinating Minister for Maritime Affairs and Investment Luhut Pandjaitan - who is tasked by President Joko Widodo to oversee the pandemic responses in Java and Bali - hinted last week at the possibility of requiring booster shots as a travel requirement. It was not immediately clear if the plan would include both domestic and international travel.

"If in July, the number [of cases] continues to increase, we [may] use booster shots as a travel requirement. This is for the common good," Luhut said, as quoted by state news agency Antara. Currently those who have received two vaccine shots could travel without having to show a negative Covid-19 test.