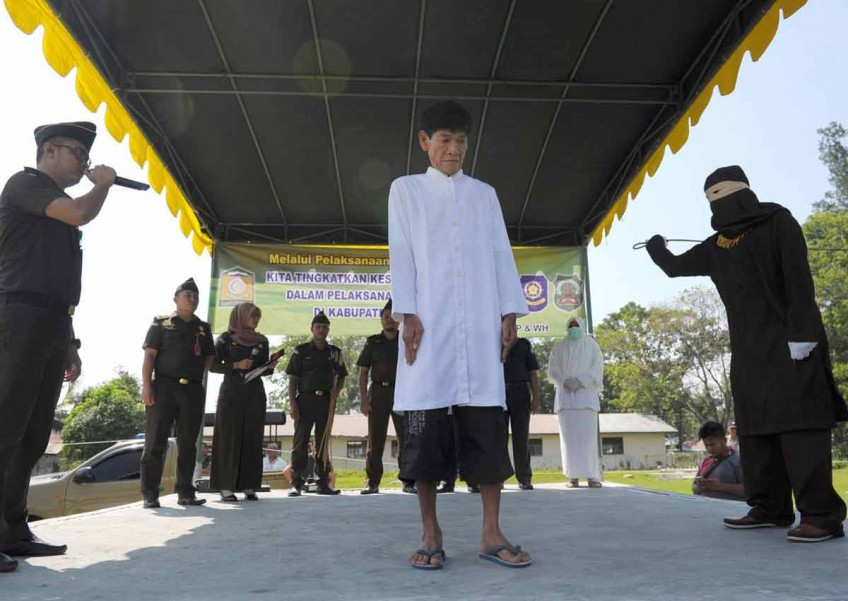 One of the two ethnic Chinese and members of the Buddhist minority, gets whipped in front of dozens of local officials and residents in the city of Jantho, Aceh province on March 10, 2017.
AFP

Jantho, Indonesia - Indonesia's only province to impose sharia law caned Buddhists for the first time Friday, after two men accused of cockfighting opted for punishment under the strict Islamic regulations.

Alem bin Suhadi, 57, and Amel bin Akim, 60, both ethnic Chinese and members of the Buddhist minority, were whipped in front of dozens of local officials and residents in the city of Jantho, Aceh province.

The two men grimaced as they received nine and seven lashes respectively on their backs, a sentence that was mitigated because they had spent over a month in detention since police nabbed them for cockfighting in Aceh Besar in January.

"When they were arrested, two chickens and 400 thousand rupiah of betting money were confiscated by the police," said prosecutor Rivandi Aziz.

Caning is common in Aceh for breaking the province's strict Islamic laws, for offences ranging from drinking alcohol, to gambling to gay sex.

In the past only Muslim residents could be caned but that changed in 2015, when Aceh's regulations were overhauled.

Non-Muslims who violate Islamic law can either choose to be tried under the national legal system or sharia.

The two Buddhists would likely have faced jail under Indonesian nation law.

"We live in Aceh, so we have to obey the regulation in our region," Alem told AFP shortly after being caned.

A Muslim was also lashed seven times for betting on cockfights Friday, while another man accused of abusing three teenagers was lashed 112 times.

Aceh, on Sumatra island, began implementing sharia law after being granted special autonomy in 2001, an attempt by the central government in Jakarta to quell a long-running separatist insurgency.

Islamic laws have been strengthened since the province struck a peace deal with Jakarta in 2005.