A satirical message is seen on a grave marker in Jombang Cemetery in South Tangerang, Banten, on May 28.

Despite the strict protocols in place surrounding the burial of victims and suspected victims of Covid-19 there have been a number of incidents reported recently of family and friends forcibly carrying off the bodies of dead patients from hospitals to be buried according to their own wishes.

On June 3, hundreds of people descended on Dadi Hospital in Makassar, South Sulawesi, to take away the body of a patient under surveillance (PDP) who died two days after being admitted to the hospital.

Hospital director Arman Bausat confirmed the incident, saying that the hospital could not do much to prevent the removal as some of those at the scene were armed with sharp weapons. CCTV footage showed seven people entering the intensive care unit (ICU) room and immediately taking the body away.

"If we had prevented them, there may have been undesirable consequences. So, I instructed [the medical staff] to let them go just to avoid bloodshed," Arman told kompas.com last Thursday.

The patient had been previously admitted to Akademis Jaury Hospital and was transferred to Dadi Hospital after showing symptoms of coughing, severe fever, shortness of breath and vomiting.

Arman said his hospital had yet to take samples of the patient for examination. Before the body was taken away, Dadi Hospital and the task force were planning to bury it at the Maccanda Cemetery in Gowa regency under Covid-19 protocols.

Four days later, on Sunday evening, about 150 people flocked Stella Maris Hospital also in Makassar to forcibly remove the body of a PDP, a woman in her 50s who had died hours after showing severe symptoms.

A joint force of the Indonesian Military and the National Police was deployed, leading to a clash between the crowd and the security forces.

The mob successfully broke through the military and police lines and carried away the body of the victim on a stretcher covered with a sarong.

"We tried to prevent and disperse them, but we were outnumbered and they finally took the body away," Wahyu said.

Before Sunday's incident, the bodies of two other PDPs were forcibly removed by family members for burial, according to hospital director Luisa Nuhuhita.

"It is criminal, especially when it can affect the wider community, and we will investigate further," Ibrahim said.

In Surabaya, East Java, a video that recently went viral appeared to show both the dead body of a Covid-19 patient and a hospital bed being removed from a hospital by people in Semampir district.

Semampir district head Siti Hindun Robba Humaidiyah said the incident happened on June 4, adding that the patient's family insisted on taking the body home as they believed that the patient did not die from Covid-19.

"They denied it was Covid-19, even though the result of the patient's swab test was positive," Siti said.

District officials, community health centre staff and local figures later visited the family to ask that the body be buried according to the Covid-19 protocols, to which they finally agreed. Family members in contact with the body were also asked to undergo a rapid test.

Also in Surabaya, family members, backed by hundreds of ojek (motorcycle taxi) drivers, flocked to Dr. Soetomo General Hospital to carry off the dead body of a fellow driver from the hospital's mortuary. 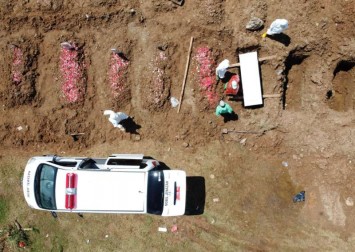 One of the patient's friends, Suroso, said that DAW was attacked while delivering a food order for a customer, fell from his motorbike and was injured. DAW was treated for four days at the hospital but his condition deteriorated.

The body was buried by the family at midnight on Sunday but not in compliance with health protocols.

"In the Indonesian tradition, among all religions and cultures, death is an important stage in life. Meanwhile, the Covid-19 burial protocols are very simple and fast, which some may see as culturally disrespectful and unacceptable," he told The Jakarta Post on Tuesday.

Moreover, he said, the government's poor handling of such critical situations had led to imperfect understanding among the public of the pandemic and even disbelief that the country was facing a serious and rapidly spreading disease.