Indonesian girl howls through circumcision as debate heats up 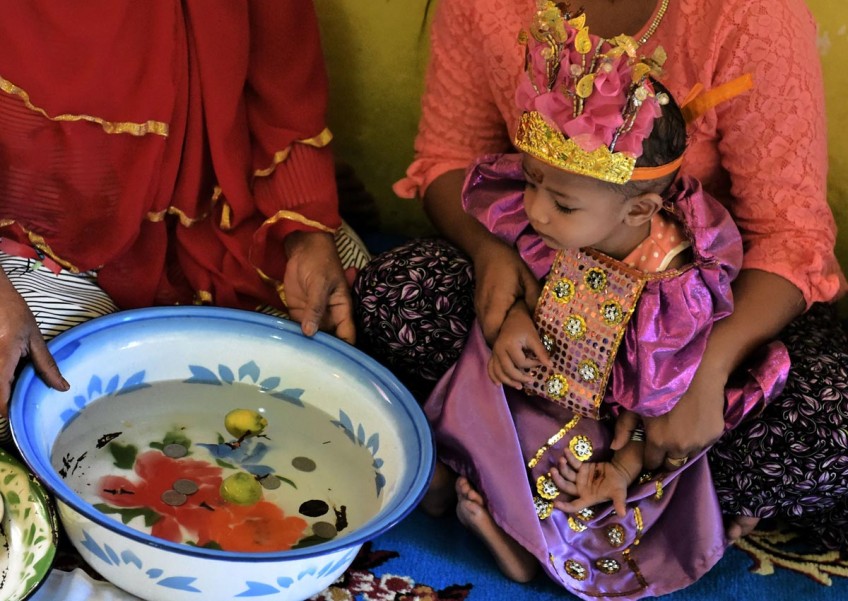 At the celebrations attended by relatives, shrieks filled the modest, yellow-walled house in remote Gorontalo province as a traditional healer covered the 18-month-old girl with a white sheet and sliced skin off her genitals.

The healer used a knife to remove a tiny piece of skin from the hood that covers the clitoris - which she said looked like a "garlic skin" - then stuck the knife into a lemon.

It marked the end of a procedure supposed to rid the child of sin and signal she was now officially a Muslim.

"It's hard to see her crying like this, but it is tradition," her father Arjun Djafar, a 23-year-old labourer, told AFP at last month's ceremony.

Female circumcision - also known as female genital mutilation or FGM - has been practised for generations across Indonesia, which is the world's biggest Muslim-majority country, and is considered a rite of passage by many.

The United Nations condemns the practice and the government once sought to ban it, but opposition from religious authorities and its widespread acceptance mean FGM has been impossible to stamp out.

Nowhere is it more common than Gorontalo, a deeply conservative area on the central island of Sulawesi, where the procedure is typically accompanied by elaborate rituals and celebrations.

Despite the pain it causes and growing opposition inside and outside Indonesia, residents of Gorontalo, mostly poor rice farmers, consider female circumcision an obligation.

The healer, Khadijah Ibrahim, who inherited her job from her mother when she passed away several years ago, said that girls who were left uncut risked developing "mental problems and disabilities".

Local healers say the practice prevents girls from becoming promiscuous in later life, while there is also a widespread belief that uncircumcised Muslim women's prayers will not be accepted by God.

But the practice is not limited to far-flung parts of the archipelago.

It remains common among Muslim families even in Jakarta, although doctors there typically carry out a less extreme form of the procedure that involves pricking the clitoral hood with a needle.

In an effort to accommodate cultural and religious considerations, the government has moved away from previous attempts to ban the practice entirely and has instead sought to stamp out the more harmful methods and ensure safety.

Authorities insist the methods most commonly used in Indonesia - usually involving a pin prick - do not amount to female genital mutilation.

The methods used in Indonesia are generally less harsh than the most brutal forms of FGM found mainly in African and Middle Eastern countries, that can go as far as total removal of the clitoris.

The UN however disagrees with the Indonesian government's stance, classifying FGM among "harmful procedures to the female genitalia for non-medical purposes" and has passed two resolutions aimed at stopping it worldwide in recent years.

The global body says FGM has no health benefits and can cause many problems, such as infertility and an increased risk of childbirth complications.

Debate within Indonesia has been heating up in recent times, with activists and even a major Muslim organisation arguing against female circumcision, saying it violates a woman's right to do as she wishes with her body.

"I believe there are no verses in my religion that allow female circumcision - it is not in the Quran," Khorirah Ali, a member of the government-backed national commission on violence against women, told AFP.

The country's second-biggest Muslim organisation, Muhammadiyah, discourages its followers from partaking in circumcision but the largest, Nahdlatul Ulama, and the country's top Islamic authority the Indonesian Ulema Council (MUI) are still in favour.

The issue is a hot potato and the government has flip-flopped in recent years.

In 2006, the health ministry banned doctors from carrying out female circumcision, saying there was no medical benefit - but the MUI hit back with a fatwa saying that women who undergo the procedure would be considered noble.

The government backtracked several years later and said licensed medics could conduct the procedure as long as it was only "scratching the clitoral hood", only to later void this measure in favour of asking a specially appointed council to issue safety guidelines.

Campaigners say the constant changes have created confusion about what is allowed and more harmful practices - such as those used in Gorontalo - continue to exist.

Despite the opposition, the practice is unlikely to end soon in the country of 255 million people.

Jurnalis Uddin, an expert on female circumcision from Jakarta-based Yarsi University, and a member of the government's advisory council, said the focus should be on encouraging the less harmful methods.

"To get rid of the practice completely is like swimming against the current," he told AFP.