Indonesian police have arrested six suspects believed to be linked with a plan to assassinate four state officials and a prominent pollster as part of a broader plot to sow unrest ahead of last week's Jakarta riots that left eight people dead.

Five men and one woman had been detained on suspicion of accepting payments to carry out contract killings or supplying weapons, according to Indonesian police spokesman Muhammad Iqbal.

"The leader of the team received 150 million rupiah (S$14,400), while another suspect received 25 million from one person," Iqbal said on Monday, declining to disclose the names of the targets.

Iqbal said police also knew the identity of the person who ordered the assassination attempts, which had been set up in March and April. Several parts of the Indonesian capital had been photographed and mapped out for the plots, he added.

"But Allah still loves this country, and we were given a way to uncover this," Iqbal said.

The ringleader of the plan, referred to by police only as HS, had bought four firearms which he distributed to three other suspects, according to Iqbal. HS and three others are accused of carrying out the attempted killings, while the remaining two suspects are thought to have supplied the weapons.

All have been charged under a 1951 emergency law covering the possession and delivery of illegal firearms. They could face life imprisonment if convicted.

Last week, Jakarta was rocked by riots triggered by mass protests against the re-election of incumbent President Joko Widodo, who triumphed over rival Prabowo Subianto after securing 55.5 per cent of the vote. 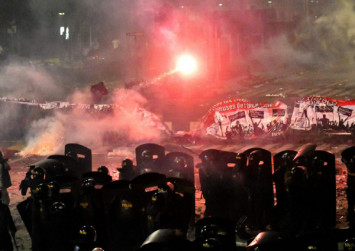 Prabowo has lodged a legal challenge against the result at Indonesia's Constitutional Court, alleging widespread fraud and claiming Widodo should have been disqualified. But independent observers have said the elections were generally free and fair.

Authorities on Monday also revealed that rioters had deliberately attacked a mobile brigade police hostel in the Petamburan area of Jakarta in an attempt to steal weapons.

Police spokesman Dedi Prasetyo said 50 officers had managed to secure the weapons and ammunition despite coming under sustained attack from hundreds of people throwing stones and petrol bombs.

One week on from the riots, security remains tight at a number of spots across the capital.

On Monday a small group of demonstrators turned up at Jakarta's iconic National Monument to protest against the police force's handling of the unrest.

A flier had been circulated on social media calling on people to rally in support of suggestions that Indonesian police chief Tito Karnavian be removed from his job, but the protest was cancelled due to insufficient turnout.

Over the weekend the headquarters of the mobile brigade police at Purwokerto in central Java was attacked in the early hours of Saturday by an unknown gunman carrying automatic firearms.

An officer was shot in the head and had to be rushed to hospital.

Central Java commander Tori Kristiyanto said the assailant had fired from a car at a police guard post at around 1.30am.

A day later a member of Prabowo's campaign team, Mustofa Nahrawardaya, was arrested for spreading false information about the riots on Twitter as well as racial and religious hate speech.

The politician from the National Mandate Party stood as a candidate in local legislative elections in Central Java this year but failed to win a seat in parliament. He is widely known for his activism on social media.

Nahrawardaya is also an administrator at Islamic NGO Muhammadiyah, where he is listed as the organiser of library information for its central leadership. He is a member of the organisation's broadcasting and public information division.

One of the eight who died in last week's rioting included a 15-year-old boy.

The chairman of the Indonesian Commission for the Protection of Children on Monday said religious teachers had last week directed youngsters to take part in the violence.

Susanto added that other children had simply been encouraged to join in by their peers.

The organisation has identified at least 52 children involved who had since been placed in a social rehabilitation hall in Jakarta.

"[The commission] appeals to all parties, including religious leaders, not to invite children to take part in any political activities," Susanto said.

Rusli Karim, a 15-year-old Jakarta high school student, said: "I joined the protest to defend Islam, to defend our nation from being ruled by a Muslim who never shows a willingness to protect or defend Islam."