Police in Pemalang, Central Java, have arrested a 15-year-old boy who had been dressing up as a pocong (shrouded ghost) and scaring motorists travelling on Jl. Tentara Pelajar in Mulyoharjo district.

The boy, identified as AM, had been "haunting" the road in the hours between tarawih (evening Ramadan prayers) and sahur (predawn meal).

Pemalang Police chief Adj. Comr. I Ketut Mara said the police had received several reports of pocong sightings from residents in the past few days.

"Based on those reports, Pemalang Police detectives and Sabhara [public order] units conducted an investigation and patrols," he said on Monday as quoted by kompas.com. 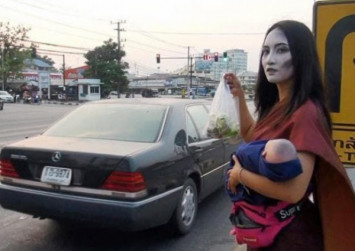 The police eventually made a move against the so-called ghost on Jl. Tentara Pelajar in the early hours of Sunday when it tried to scare them.

"The suspect was reprimanded by the officers because he is still a minor," Ketut said, adding that AM's actions could have endangered motorists.

"Motorists who are surprised could easily have fallen or crashed into other vehicles," he said.

AM himself admitted his actions and said he had done it for fun.

"I regret it and I promise not to do it again," he said.