JAKARTA - A police officer in East Java carrying a cute backpack during an official event became the talk of the town recently when pictures of him and the backpack appeared on social media.

The officer, Mr Dharma Budi Kusuma, was caught on camera carrying the backpack during an official security briefing ahead of the regional elections on June 26 in Pakis in the city of Malang. He was dressed in his complete official uniform, making the bright orange and yellow backpack look highly unusual.

On June 27, millions of voters across the province elected regional leaders, including the governor.

Kompas.com reported that Mr Dharma said he carried the bag at the request of his five-year-old daughter while on a longer than usual shift on duty. Hearing he would be away from home for three days, Mr Dharma's daughter gave him her school bag. 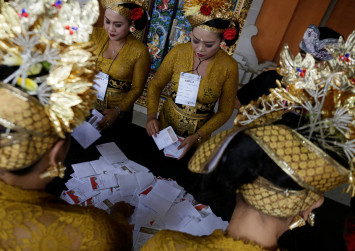 "The morning I left home, my daughter came to me and said, 'Father, you should wear this bag, so you will remember me and mother wherever you go on duty'," he said on Saturday (June 30), as quoted by kompas.com.

Mr Dharma, who graduated from the police academy in 2007, decided to tote the bag until the ceremony was completed. He believed this would meet the request of his daughter.

He said he had some hesitations about wearing the bag because of its shape and appearance, but finally decided to do as his daughter asked.

Mr Dharma's accessory came to the attention of Malang police chief Yade Setiawan Ujung, who took the pictures. Mr Yade said he appreciated the human side of his subordinate.