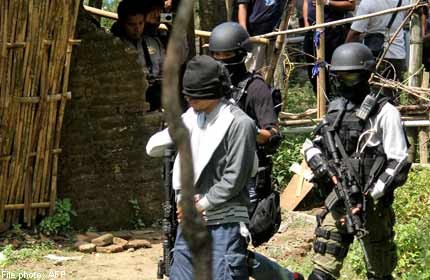 Counter-terrorism chief Ansyaad Mbai said the men were part of a violent Islamist group and were shot as the anti-terror police unit Detachment 88 conducted a raid on the street in an East Java town.

"Detachment 88 had sought the men over a recent attempted suicide bombing and a case of hacking to fund militant activities," Mbai told AFP.

One of those killed, identified as Dayah, "took out a weapon and began firing at the squad, which led to a gunfight", Amar told reporters.

"Two suspects died and the other two surrendered and were arrested," Amar said.

The other suspect shot dead was identified only as Rijal.

Police seized a revolver and a bag containing a homemade bomb.

Mbai connected the men to an attempted suicide bombing in June on a police compound in Poso - a district on Sulawesi island known for militant activity.

The bomber blew himself up, only injuring a construction worker.

It was the first suicide attack in Indonesia since September 2011, when a bomber injured dozens in an attack on a Central Java church.

Police have said the suicide bomber was suspected of being part of the Eastern Indonesia Mujahideen Islamist terror group - headed by Santoso, Indonesia's most wanted militant.

The group hides out in the jungles around Poso and is suspected of carrying out a series of attacks, including police killings.

Indonesia has been waging a campaign against Islamist terror groups for more than a decade and has largely dismantled some of the deadliest groups, with only low-impact attacks carried out in recent years.