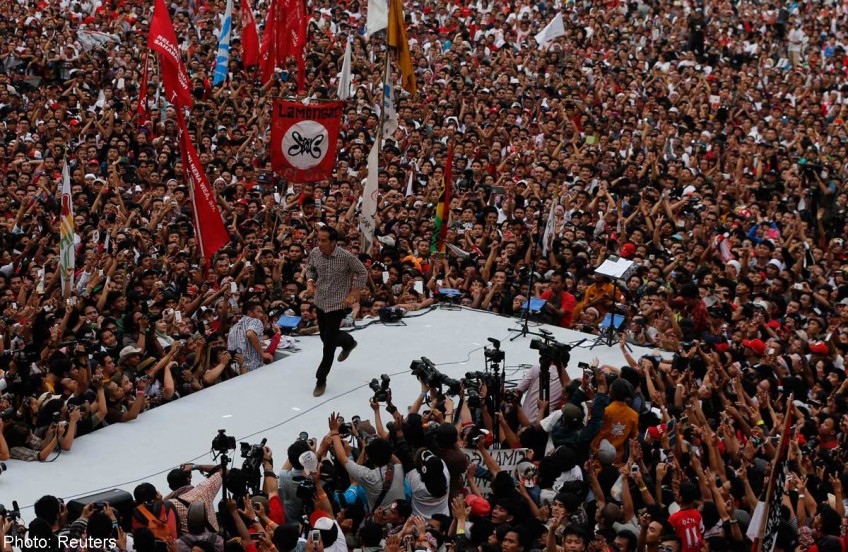 Man of the people: Mr Joko “Jokowi” Widodo (left) running on stage after delivering a speech in front of his supporters in Jakarta yesterday. His reputation as a man of the people has made him the front runner for Wednesday’s polls, albeit by a thin margin over his rival Prabowo Subianto.

Starting his victory speech with a special tribute to his rivals, Prabowo Subianto and Hatta Rajasa, on Tuesday evening, president-elect Joko "Jokowi" Widodo called on the nation to unite again after the divisive presidential race, saying that a unified nation would help to create a new Indonesia.

Jokowi did not touch on Prabowo's decision to reject the results of the election, due to the latter's allegations of massive vote rigging despite failing to come up with concrete evidence to support the allegations. Hatta had earlier distanced himself from Prabowo and hinted that he conceded defeat to Jokowi and Kalla.

"We highly appreciate and thank Bapak Prabowo Subianto and Hatta Rajasa who have been our friends in the political competition," the Jakarta governor said in his speech aboard a traditonal phinisi ship in Sunda Kelapa Port in North Jakarta.

His aides said Jokowi intentionally chose the ship as the venue to address the nation as a symbol of his strong determination to realise his campaign promise to create a strong maritime future for Indonesia. In an earlier TV debate with Prabowo, Jokowi outlined an ambitious programme to revive the country's maritime status.

In his speech, Jokowi insisted his victory, with his running mate Jusuf Kalla, belonged to the whole nation - not simply to those people who had voted for the pair, but also to those who wanted Prabowo and Hatta Rajasa to lead the nation for the 2014-2019 period.

"In the last few months our differences in political choices were reason to divide us," said Jokowi, adding that his victory in the election "was a victory for the entire Indonesian people and we hope that with this win [...] we will be sovereign in politics and self-sustaining in economics and [build] character in culture."

The former Surakarta mayor also emphasised the urgent need for families, friends, relatives and neighbours who had made different political choices in the election to end their divisions and heal the wounds caused by the presidential race.

Politics should be made a source of joy, good deeds and liberation, said Jokowi, who will succeed outgoing President Susilo Bambang Yudhoyono in October. The election had also revived the lost spirit of voluntarism and togetherness in society because people found new hope in their lives, he said.

Jokowi added that under his leadership as the country's president, with Jusuf Kalla as his deputy, the Indonesian people would be able to enter a new era. And this goal could only be reached, he said, when the nation was strongly united and working together, each according to their position in society.

Therefore he urged his supporters and Prabowo's supporters to return to their daily lives and forget the bitterness of the election.

"From now on, farmers return to the rice fields, traders to the markets, laborers to the factories, employees to their offices," said Jokowi.