Herry Wirawan, a former teacher and founder of an Islamic boarding school, who is accused of raping 13 school girls between 2016 and 2021, is escorted by officers to the court room prior to his verdict trial, at the district court in Bandung, West Java province, Indonesia, on Feb 15, 2022

An Islamic studies teacher in Indonesia was sentenced to death on Monday for raping 13 of his students, reviving a simmering debate over the use of capital punishment in the Southeast Asian nation.

Herry Wirawan, 36, impregnated at least eight girls between 2016 and 2021 at the boarding school he ran for children from low socio-economic backgrounds. His victims gave birth while still at the school and their babies were used to solicit donations, a court heard.

Abolitionists say there is no evidence that the threat of execution acts as a deterrent against serious crime in countries that retain capital punishment such as the US.

In Singapore, activists on Sunday staged a peaceful protest against capital punishment after the city-state resumed executions of death row convicts for the first time since 2019, sparking a storm of criticism.

Wirawan was initially sentenced in February to life imprisonment, but the High Court in Bandung changed this to the death penalty after the prosecution appealed. Presiding judge, Herri Swantoro, said Wirawan had committed "the most serious crime" and had deeply hurt his victims.

This marks the first time in Indonesian legal history that a death sentence has been handed down in a sexual assault case. Wirawan's earlier life term for his crimes also set a legal precedent.

Capital punishment in Indonesia is typically reserved for drug traffickers, terrorists and murderers, though it can technically be handed down for a range of other crimes such as corruption, sedition and rape.

Executions are carried out by a firing squad formed of members of the paramilitary Mobile Brigade Corps - a special police unit also known as Brimob.

Under Indonesian law, the suggested term for the rape of a child is 15 years in prison, but judges have discretionary powers to hand down tougher sentences.

Human rights Ranto Sibarani added, "Indonesia has been quietly working behind the scenes to expand the death penalty's reach".

Ranto Sibarani, an Indonesian human rights lawyer and advocate for abolition, said the death penalty had been added as a possible punishment for child abusers in a 2016 amendment to the country's 2002 Child Protection Law.

"While other countries have been working to abolish the death penalty, Indonesia has been quietly working behind the scenes to expand its reach," he said. "Countries that use the death penalty tend to believe that it has a deterrent effect but there is no evidence that this is true."

Nevertheless, a family member of one of Wirawan's victims told local media that they hoped the verdict would act as a deterrent. "Thank God, this has made history, hopefully, this death sentence will deter other perpetrators who are still out there," said the 34-year-old, identified only as AN.

Usman Hamid, executive director of Amnesty Indonesia, said the case highlighted "how widespread sexual violence is in Indonesia" and showed the need for laws to combat it.

"Wirawan's actions were totally intolerable. Truly trampling on humanity. But imposing a death penalty sentence is in contravention of international law and standards. Legal protections for the right to life must apply equally to all individuals," he said. "Punishing just one person with a death sentence will not change the sexual violence emergency situation in Indonesia."

Professor Maidin Gultom, dean of the law faculty at Santo Thomas Catholic University in Medan, said that while a death sentence, in this case, was legally justified under Indonesian law, it was important to think about such cases "neutrally and not emotionally".

"The law has three purposes: to provide justice, to provide legal certainty, and to be useful," said Gultom, who specialises in child protection law. "What is the use of executing this man? How will it be of use to the victims, their families and society?"

The execution of a convicted rapist stood in stark contrast to how other countries punished such criminals, he said, giving the example of Reynhard Sinaga - an Indonesian national jailed for life in Britain after being convicted of 136 rapes between 2015 and 2017.

In addition to provoking debate about the use of capital punishment, Wirawan's crimes have also shone a spotlight on poorly regulated schools and religious organisations in Indonesia.

Lukas Lucky Ngalngola, a Catholic priest also known as "Brother Angelo" who ran an orphanage on the outskirts of Jakarta, was jailed in January for 14 years for sexually abusing children under his care.

That same month, Benyamin Sitepu, a Protestant priest and headmaster in Medan, North Sumatra, was jailed for ten years for sexually assaulting six of his female students. 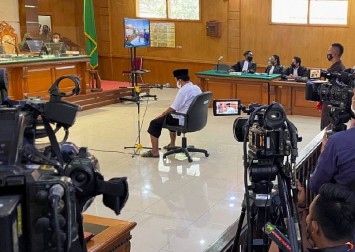 Sibarani, the human rights lawyer, said these and other cases showed the need for mechanisms to provide children with ways to safely report abuse, and refuse accreditation to schools or religious organisations that do not have clear child safety policies.

"Executing sex offenders doesn't have any connection with protecting children," he said.

"Since 2002 when the Child Protection Law was created, we've been trying to work out how to keep children safe, but these kinds of cases keep happening. So now the judiciary is frustrated and is starting to hand down death sentences."

"What we need is an action plan to safeguard children. Not just punishments."