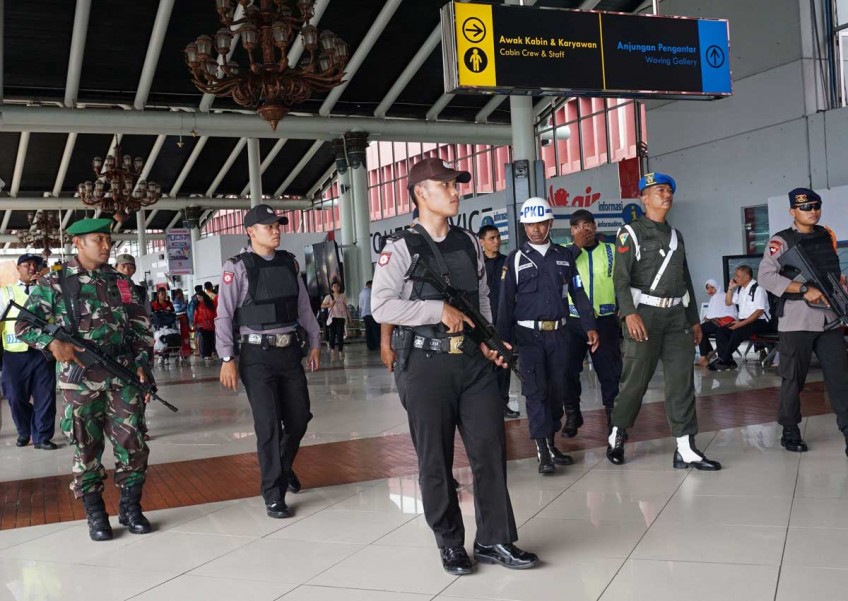 JAKARTA - Truckloads of soldiers and police took the streets of Jakarta on Friday, securing shopping malls and business areas, as residents in the Indonesian capital braced for a large-scale protest planned by hardline Muslim groups.

Thousands of protesters, led by the Islamic Defenders Front (FPI), are expected to demand the resignation of the Jakarta governor, a Christian and the first ethnic Chinese in the job, over claims that he insulted the Quran.

Protesters have started gathering at the Istiqlal Mosque, from where they plan to march to the palace to push President Joko Widodo to take action against Jakarta governor Basuki Tjahja Purnama, his deputy when he was himself the governor of the capital from 2012 to 2014.

"He is not Muslim but he humiliated the Quran," protester Muhammad told Reuters. "Don't refer to anything in the Quran, especially interpreting it incorrectly...I call on God to jail him."

Some Muslim groups have accused Purnama of blasphemy after he said his opponents had deceived voters by attacking him using a verse from the Quran.

During a visit to an Indonesian island, Purnama referred to a verse from the Quran that seemed to suggest it was un-Islamic to vote for a leader of a different religion.

Critics say Widodo's government has not done enough to contain the religious and ethnic tensions that are mounting ahead of the election for Jakarta governor in February 2017.

Widodo and the vice president, Jusuf Kalla, called for a peaceful protest in a joint statement on Thursday, saying that"everything and everyone should continue to work as normal."

The mood is tense in Jakarta, a sprawling city of around 10 million, with companies asking employees to work from home, access to the main business district restricted and several foreign embassies urging their citizens to stay safe.

Novi Suhartini, who works at an advertising company, has decided to stay home on Friday. "It's a precaution in case there's a clash. We know a large group of people can easily be provoked," she said.

There has been a growing pushback on social media against any extremist movement: #wearenotafraid (#kamitidaktakut) and #peaceaction411 (#aksidamai411) were among the trending topics on Twitter.

Some banners draped on overhead bridges called for Indonesians to respect diversity. "Your religion or ethnicity doesn't matter, as long as you can do something good for everybody," said one banner.

The 2017 Jakarta governor election will see the Christian Purnama, who has a reputation as a tough reformer, pitted against two Muslims - Agus Harimurti Yudhoyono, a son of former president Susilo Bambang Yudhoyono, and the previous education minister Anies Baswedan.