In the week and a half that hardline Islamic cleric Habib Rizieq has been back in Indonesia , he has called for the beheadings of those who insult the Prophet Mohammed, sought the release of a convicted terrorist leader and sanctioned prayers for President Joko Widodo’s death.

Perhaps most concerning, Rizieq, the leader of the Islamic Defenders Front, has presided over meetings of tens of thousands of his followers, ignoring health protocols in a country where there has been more than 488,000 infections and over 15,600 deaths.

In the face of government inaction against Rizieq’s mass gatherings, the soap opera star Nikita Mirzani, who is known for ignoring another kind of protocol in Indonesia – dressing modestly – boldly criticised him, angering his supporters, who threatened to send 800 people to raid her home over the weekend.

“The police, military, government were stunned to see the massive turnout to welcome Rizieq and didn’t quite know what to do. But Nikita came out to criticise him,” said Najib Azca, a lecturer in the sociology department at Gadjah Mada University in Yogyakarta.

In a post on her Instagram account, which has since been deleted, Nikita described the massive crowds that greeted Rizieq at the airport upon his return home as “excessive”.

“The welcome was insane, traffic jams everywhere,” she said, adding that one of her friends missed her flight because of the crowds.

“[Rizieq] always makes trouble but he gets a [warm] welcome,” she said.

In response, a furious Rizieq and his supporters called her “lonte”, an extremely crude Indonesian word for slut.

For segments of society worried about the spread of the coronavirus and for health workers exhausted from dealing with the pandemic, they see in Nikita – who stars in The Soul Mate In My Father’s Will (Jodoh Wasiat Bapak) – someone who represents their worries and frustrations over perceived government inaction on the issue.

“This is the first time I met an Amazon woman,” one of Nikita’s 10.3 million followers wrote in praise of her on her official Instagram account.

Analysts said the phenomenon of Rizieq and the emergence of his opposite, Nikita, reflected “a nation in crisis”, where two divergent segments of society have found voices in two distinct personalities who are not “exemplary” figures.

“They are both bold, loud, have many followers but don’t have integrity and other qualities that make them worthy to be exemplary figures,” said Najib.

In 2017, Nikita announced she was going to pose for Playboy magazine’s Philippines’ edition. She later cancelled her contract, telling the local press she did not want to spoil her relationship with her then boyfriend.

Rizieq has since been fined 50 million rupiah (US$3,500) by the Jakarta Public Order Agency for violating health protocols during the events.

On Friday, Jakarta military commander Major-General Dudung Abdurachman threatened to break-up Rizieq’s Islamic Defender Front (FPI) in a rare rebuke by the military, which was the most powerful institution under the 32-year rule of the late President Suharto until his ousting in 1998.

“I am warning you and I will not hesitate to act firmly. Don’t try to disrupt the unity and integrity [of the nation]. Don’t feel that you represent [the entire] Muslim community,” Dudung was quoted as saying by CNN Indonesia.

Dudung’s stern words were welcomed online with the hashtags #ThatWasMyOrder and #Dudung trending on Twitter in Indonesia.

Rizieq returned to Indonesia on Nov 10 from a three-year self-imposed exile in Saudi Arabia . Although the National Police had dropped a charge against him in connection with a pornography case two years ago, Rizieq, who had originally travelled to Saudi Arabia for religious purposes, decided to stay there until his recent return. 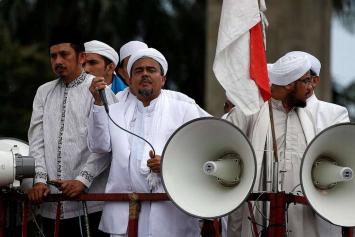 The charge centred around a WhatsApp chat between Rizieq and a female supporter that include naked images of the woman – a crime under Indonesia’s anti-pornography law.

For those unhappy with the government’s handling of the pandemic, economy and other issues, Rizieq was welcomed home as an opposition figure – as he was bold, of Arab descent and possessed the right “religious attributes”, Najib said.

“His followers see him as someone who could take on the government, never mind the fact that he does not possess depth of knowledge,” Najib said. “Rizieq’s knowledge of Islam cannot be compared to those [clerics] from Nahdlatul Ulama and Muhammadiyah,” he said, referring to the country’s two largest Muslim organisations, which together have more than 100 million followers.

Najib said Rizieq represented “intolerant Islamists” who were growing in number. “If they are not handled well, this group has a potential to become big and to influence and determine the outcome of the 2024 elections,” said Najib.

Muhammad Habib Abiyan Dzakwan, a researcher with the disaster management unit at the Centre for Strategic and International Studies in Jakarta , expressed concerns over potential new clusters owing to the crowds that gathered for Rizieq’s events, which included the wedding of his daughter last weekend.

“However, I am more directly concerned with the government’s failure to respond to the matter properly,” Habib said. “It feels like there’s a discrepancy in terms of health protocol enforcement.”

Habib said that although many cafes, restaurants, malls and other places where crowds normally congregate have been shut down for flouting Covid-19 rules, religious leaders and high-level political figures face little action when their supporters congregate for mass gatherings.

“Cherry-picking enforcement will not help Indonesia to bring down the number of infections in this pandemic,” Habib said, adding that the government had “no concrete plan” for testing or contact tracing of those who attended Rizieq’s events. Instead he said, the government relies “on reactive measures and not preventive measures”.

The national Covid-19 task force chief Doni Monardo said on Friday that at least 77 people who were part of the crowds at Rizieq’s recent events had tested positive for the coronavirus.

And there is more to come from Rizieq – he plans to travel to the provinces for a “safari dakwah”, an expedition of preaching and proselytisation.

“I am really feel nauseous hearing about this safari dakwah,” Habib said, pointing to how Rizieq’s organisation “cannot control the crowds” and “hesitancy from the government in acting promptly in preventing these crowds”.

Rizieq’s Islamic Defenders Front (FPI), has been implicated in multiple acts of harassment, intimidation, threats and mob violence against religious minorities. FPI has attacked and burnt the homes of a tiny Muslim sect named Ahmadiyah. Some FPI members have travelled to Syria to fight for Islamic State.

FPI, which campaigns for the implementation of sharia law in secular Indonesia, is also known for attacking night clubs and bars during the fasting month of Ramadan.

Last weekend, Rizieq made an emotional speech in Bogor, West Java, where he called on the police to act against those who insult the Prophet, Islam and Muslim clerics if incidents similar to the beheading of French schoolteacher Samuel Paty in Paris last month by a Chechen extremists were to be avoided. Paty had showed his students cartoons of the Prophet published in 2015 by Charlie Hebdo , a French satirical newspaper, during a civics lesson.

“If no action is taken against them, don’t blame Muslims if you find their heads on the roadside,” Rizieq told his followers.

A senior security source in Jakarta told This Week in Asia he believed the speech was partly directed at Nikita, for her criticisms of Rizieq and his followers. “This is a provocative speech and in part is in response to Nikita’s criticisms of him,” he said.

The former head of Indonesia’s Constitutional Court, Jimly Asshiddiqie, denounced Rizieq’s speech, saying it was “full of hatred” and “enmity”, adding that the authorities “must take action”. 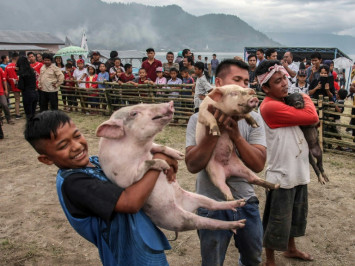 “If this is allowed to go on, the provocation will deepen and spread,” Jimly said on his official Twitter account.

Asked about the likelihood that any of Rizieq’s followers could respond to his call to behead anyone who insults the Prophet or Islam, Robi Sugara, a lecturer and counterterrorism analyst at Syarif Hidayatullah Islamic University in Jakarta said: “Whether or not it could take place depends on whether Rizieq’s followers come face to face with a person who insulted the Prophet on the road. It may or may not happen.

While the country of 270 million was once held up as a model of secular democracy, religious conservative talk dominates Indonesia social media space on wide-ranging issues including gender and the government, according to a study by researchers from Syarif Hidayatullah State Islamic University.

The study, which was reported on by The Jakarta Post , found that conservative narratives have dominated online conversations about religion, particularly on Twitter, where they accounted for 67 per cent of the total, compared with 22 per cent for moderate narratives.

Liberal narratives, meanwhile, accounted for 6.1 per cent of the total online conversations about religion, and Islamist perspectives 4.5 per cent, according to the study, which combed through Twitter data from 2009 to 2019 and included interviews with public figures and prominent social media users.