A couple in Semarang, Central Java, have lost family members to Covid-19 days after their wedding ceremony.

Semarang mayor Hendrar Prihadi said the wedding had not adhered to the health protocols issued by the Religious Affairs Ministry.

"The wedding ceremony took place four days ago. It was not carried out according to health protocols as the bride and groom invited more than 30 people," Hendrar said on Saturday as quoted by kompas.com .

The letter said couples were allowed to hold the ceremony at their home, at a mosque or in a meeting hall. However, a maximum of 10 people would be allowed to attend such ceremonies at home or at the KUA office. 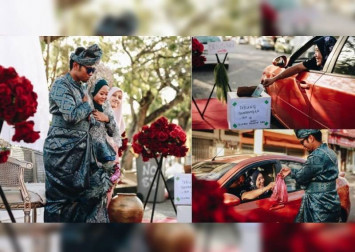 Ceremonies at mosques and in meeting halls would be limited to 20 per cent of the space’s capacity, though not exceeding 30 people.

Hendrar said that after the wedding, the bride and groom's family members started to get sick one by one and that some had succumbed to their illnesses.

"I heard the groom's mother passed away, the father is also sick and is in critical condition. The bride's sibling passed away too," he said.

"Initial testing of nine people revealed that five people had Covid-19. However, we found many more family members with Covid-19 after we conducted contact tracing," Hendrar said, adding that some of the mosque’s staff members had also contracted the disease.

He said the wedding had contributed to a spike in Covid-19 cases in Semarang.

Semarang had recorded 554 cases of Covid-19 with 112 fatalities as of Monday according to data from the city health agency.

The figure had jumped 136 per cent from last Monday, when the city had recorded 234 confirmed cases of Covid-19.