By the standards of most court cases, the scene at the Karawang District Court in West Java, Indonesia, on Dec 3 was dramatic.

As the judge acquitted housewife Nengsy Lim, alias Valencya, of a domestic violence charge, the 45-year-old mother of two collapsed amid floods of tears and had to be helped to her feet by her legal team.

Lim had been facing the prospect of a year in prison after she was charged under Indonesia’s domestic violence law. Her crime: allegedly nagging her husband who was, according to her testimony, frequently drunk, thus causing him psychological harm.

The panel of judges, however, sided with Lim when they threw out the case, but things could have turned out very differently had local media and Indonesian social media not latched on to the story.

“It went viral because of attention from the public,” said Zuma, the director of the Legal Aid Foundation of the Indonesian Women’s Association for Justice.

“On this occasion we have the media to thank for raising it in the public consciousness.”

Once the case went viral, over 7,000 people signed an online petition as the hashtag #savevalencya trended on Indonesian social media.

For many, the case demonstrated a double standard and called into question Indonesia’s domestic violence law and its interpretation by the authorities. Many found it laughable that a case of a wife “nagging” a husband was processed by the authorities with relative speed, while female victims of physical and sexual domestic violence in Indonesia regularly complain of insufficient support, victim blaming and mishandling of the legal process by police and prosecutors.

“Indonesia is still a patriarchal society, and domestic violence is often looked at as a private matter,” said Elizabeth Ghozali, a lecturer in criminal law at Santo Thomas Catholic University in Medan.

“Indonesia’s domestic violence law accommodates victims but it doesn’t offer as much protection as it could.”

Like many parts of the world, domestic violence is thought to be under-reported in Indonesia. In March 2021, the National Commission on Violence Against Women (Komnas Perempuan) found that there were 8,234 cases of violence against women recorded in 2020 – a drop from the previous year when 14,719 cases were recorded. The report concluded, however, that this may have been due to limited access to reporting opportunities because of the coronavirus pandemic .

Of the reported cases in 2020, the largest portion – 6,480 – were a result of domestic violence, with 1,731 cases caused by violence in a public place and 23 cases of state-sanctioned violence. 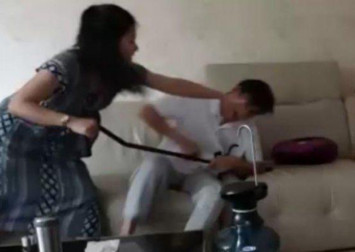 According to Tunggal Pawestri, an activist focused on women’s rights and gender issues in Indonesia, “Domestic violence is still a huge problem in Indonesia. Although we already have the domestic violence law, its implementation on the ground is still lacking, particularly from a law enforcement perspective.”

In 2004, Indonesia signed into force the domestic violence law, which recognised a wide range of issues such as marital rape for the first time. While the law on paper is comprehensive, it often falls down when it comes to victim support and handling by law enforcement such as the police, prosecutors and lawyers, Pawestri said.

“There are also not that many legal aid institutes that can provide sufficient support for female victims of domestic violence, therefore it is also important to ensure there is proper support for those victims seeking legal support,” she said.

Zuma of the Legal Aid Foundation agreed that the domestic violence law was, on paper, well put together, but also said the law was often incorrectly interpreted by those in a position of power who had a responsibility to protect victims.

“We have found that it usually takes victims years to report their abusers and to find the strength to make a police report because of shame, economic reasons or not wanting to see their abuser sent to prison.” she said. “We need to give survivors education so that they can protect themselves and know how they can speak up, and the authorities also need to work faster to process such cases,” she said.

Zuma said Indonesia still did not have much of a culture of reporting domestic violence and that, as such, survivors needed to be encouraged to pursue their legal rights to remove the stigma around such cases.

“We need people to take their cases forward even if they lose at trial,” she said. “People need to keep speaking up.”

In addition to criticisms over a lack of support for victims, there was also criticism of the fact that Lim’s case even went to trial.

Originally, the prosecution had asked for a one-year prison term for Lim but, once the case began to garner attention from the public, the attorney general’s office stepped in and the charges were withdrawn, although the legal process still had to be concluded and Lim had to go to court.

Outside the courtroom on the day of her acquittal, Lim said that “without the support of the public, I don’t know what would have happened to me”.

Law lecturer Ghozali said there was an upside to Lim’s case.

“This is a positive case if we look at it from the perspective that the case was dismissed. What we are seeing is law that is responsive to social needs while retaining the institutionalisation results achieved by the rule of law.”

Responsive law is a legal theory that offers something more than just procedural justice, but is able to function as a facilitator of responses to social needs and aspirations, Ghozali said.

“A good law must be competent and fair, and be able to recognise the public’s desire and commitment to achieving substantive justice,” she said. “The fact that this case drew attention because of the media and social media is not necessarily a bad thing.”