Two Indonesian men have told police they were each paid 300,000 rupiah (S$29.33) to buy petrol for bombs that would "burn Chinese shops" in Jakarta and "provoke the masses" into a looting spree, as seen in 1998 when ethnic Chinese residents were attacked by mobs.

Videos of the men - who were arrested on Saturday for storing, transporting and assembling explosives - were on Monday circulated on social media as pitched battles between thousands of students and police officers continued in the capital and several other cities.

Unrest has been rocking Indonesia for more than a week, sparked by proposed laws that critics say would weaken the country's anti-corruption agency. The demonstrators are also against planned revisions to the criminal code that would compromise the rights of women and minorities and toughen the Muslim majority nation's blasphemy law, among other changes.

Jakarta police on Tuesday said they had arrested more than 500 rioters from Monday's clashes, where officers fired tear gas near the parliament building to break up a crowd of about 2,000. 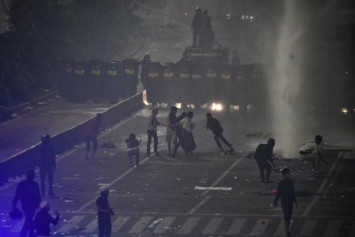 They said protesters had been throwing rocks, bottles, fireworks and petrol bombs, according to state news agency Antara. Some 26,000 police officers and soldiers have been mobilised in the capital.

The videos of the two men, first published on the Twitter account of a police officer, were authentic, Jakarta police confirmed.

In the first recording, a man who identified himself as Ali Udin from Bogor in West Java said: "I was given 300,000 rupiah to buy petrol to make Molotov cocktails which would be used to burn Chinese shops from Roxy to Grogol to provoke the masses to come out to loot those shops just like the riots of 1998.

"Furthermore, there would be someone to direct and coordinate [what would happen next]," said the man, adding that he was not under duress to make the statement.

The man was referring to ITC Roxy Mas, a mall in west Jakarta selling mobile phones where many shops are owned by ethnic Chinese, while Grogol is a neighbouring district that was the scene of violence during the anti-Chinese riots 21 years ago, which eventually led to the downfall of then-president Suharto. 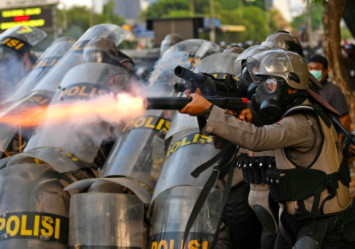 Another suspect, named Yudhi Febrian, also admitted on video to receiving 300,000 rupiah to assemble petrol bombs for the same purpose.

An ethnic Chinese resident in Jakarta said some members of his community were scared.

"We are all very concerned but we place our trust in the security authorities that they will be able to resolve this well," said the man, who did not want to be named.

But he added that it was "business as usual" for most Chinese-owned shops.

In 1998 more than 1,000 people were killed when riots erupted in Jakarta amid the crippling Asian financial crisis that threw millions of Indonesians out of work.

The two suspects were among six men arrested over the weekend for possession, storing, transporting and assembling explosive materials, according to a senior police source.

The suspects included a retired two-star navy general - rear admiral Sony Santoso - and a lecturer from the Bogor Institute of Agriculture.

Santoso was a candidate in the legislative election earlier this year in April, where he represented the Berkarya Party, which is led by Tommy Suharto, the former dictator's son.

Local press quoted a senior party official, Badaruddin Andi Picunang, confirming that the retired admiral had stood in the election.

But Badaruddin added the party was not involved in any of Santoso's activities and that if there were indications the admiral was involved in any illegal acts, he had done so in "his personal capacity, not as a cadre of the party".

The latest bout of unrest follows protests in May by opponents of President Joko Widodo against his election in the April presidential polls, and comes weeks before Widodo's inauguration for his second term. In the past week, two students have died and hundreds have been injured in bursts of chaos, though many of the rallies have been peaceful.

Security forces though were gearing up for more unrest on Tuesday as some 575 lawmakers were sworn in for a new term, after being elected in legislative polls that were also held in April.

Yose Rizal Damuri, chief economist at Indonesia's Centre for Strategic and International Studies, said the four-month hiatus between the announcement of the election results in May and the inauguration of Widodo on October 20 allowed room for all kinds of "elements" to create trouble. 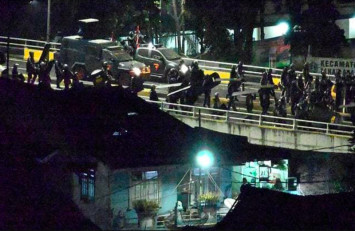 "Many people are trying to take advantage of this - the opposition, Islamic fundamentalists … many parties. It is a very mixed and complicated picture," Yose said.

Widodo could reduce the leeway for political machinations by naming candidates for his cabinet, Yose added, and thereby providing some certainty, although the president is not able to make formal appointments until after his inauguration.

"He has not done that. As a result, even some current cabinet ministers are not optimising their work as there is no certainty to their tenure and whether or not they will remain in the cabinet," he said.

The demonstrations had also raised the political risks for both foreign and local investors in Indonesia, Yose added. "Investors are now in the wait-and-see mode. Foreigners want to see whether this government can handle all these social issues."

Yose said he expected this year's growth in the economy to clock in at about 5 per cent, in line with the government's target, but "some other economists" were predicting a slight decline to 4.9 per cent.