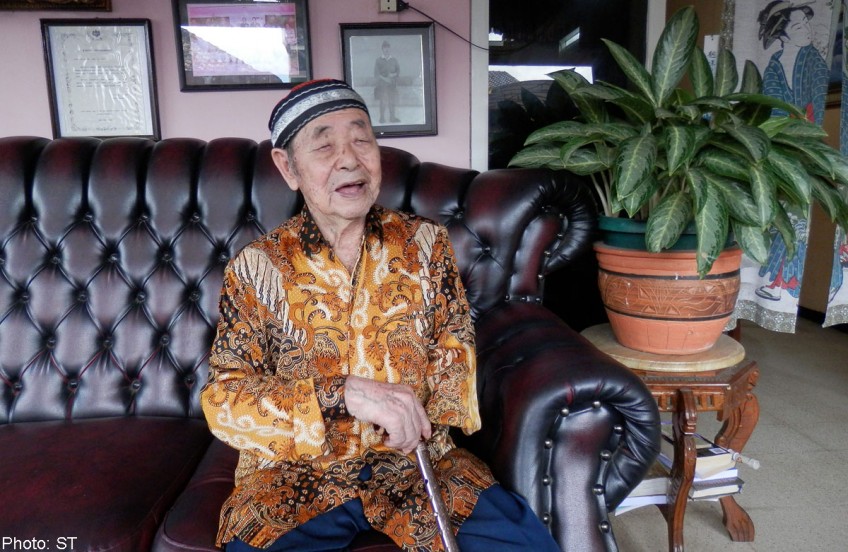 Outside one such camp in Bandung, ill-equipped Indonesians fought against returning Dutch and British troops who did not recognise the newly independent nation.

A 26-year-old Japanese sergeant and two of his friends decided they could not just sit by, and one night, sneaked out to join the locals in their fight.

"We were treated as equals, instructors and comrades, in spite of our difference," he recalls.

Recently, he was thrust into the spotlight when the second last surviving Japanese veteran, Mr Eiji Miyahara, also known as Umar Hartono, died on Oct 16 this year at the age of 93 and received a hero's burial at the Kalibata Heroes' Cemetery in Jakarta.

At a time when interest in Indonesia's recent past is on the rise, officials are trying to draw attention to the contributions of Mr Ono and his peers that have gone unrecorded in history books here.

About 900 Japanese soldiers across the country joined the Indonesian war of independence.

More than half of them died or went missing during those years.

Over the past month, Indonesia's deputy defence minister has visited the widower, his Japanese counterpart has sent gifts, and soldiers, researchers and well-wishers have dropped by to hear the veteran's war stories.

Mr Ono's Javanese wife died of cancer 30 years ago, and he has outlived four of his nine children.

In 1948, he lost his left arm in an accident involving a grenade launcher, and all but lost his vision several years back.

"I've done my duty," he tells The Sunday Times from his hillside home where he has lived for six decades, its living room decorated with photos and letters of appreciation from the Indonesian government and Japanese Embassy.

"I stayed on with just the clothes on my back and a rifle," he says. "I left the army when peace was reached, got married and became a farmer so I could send my children to school."

Mr Ono was born Sakari Ono in Furano, Hokkaido, to farmer parents. At the age of 20, as Japan's war effort gathered pace, he enlisted and in 1942, sailed for Java through Saigon and Singapore.

For much of the war, he served at the Japanese army headquarters in Bandung, which was involved in training Indonesian volunteer and paramilitary troops.

"I was struck by the spirit of the Indonesian youth," he recalls. "It was independence or death." There was, of course, no formal army, and when he crossed lines in 1945, Mr Ono was given the name Rahmat.

He was tasked to train Indonesian soldiers and deployed to East Java, where he was part of a guerilla force carrying out attacks on the Dutch near Malang.

Shortly after the Dutch withdrew from Indonesia and recognised the country's independence, Mr Ono asked to retire from the army, converted to Islam and married Darkasih, a girl from Batu.

But times were hard and it was only in the late 1950s that former veterans like him could apply to be naturalised as Indonesian citizens, in spite of medals received from the government for their war effort.

In 1966, with help from several friends, he got a job at a Japanese company in Jakarta where he did translation and administrative work.

In the mid-1970s, the job took him back to Japan where he reunited with his siblings. But he felt like a stranger in the home he had left behind.

"Besides, you can only farm half the year there," he says, with a chuckle. "Here, you can grow vegetables year round."

Titled The True Story of a Japanese Soldier who Stayed Behind, it was published in Japanese in 2007 and translated into Bahasa Indonesia in 2011.

The writer, Mr Eiichi Hayashi of Keio University and the Japan Society for the Promotion of Science, tells The Sunday Times it was unfortunate that many of Mr Ono's compatriots spent much of their lives being regarded as "neither here nor there" by both Japan and Indonesia.

Some died in poverty and a welfare foundation was set up in 1979 to help take care of poorer Japanese veterans, and Japanese companies began contributing funds.

But Mr Hayashi says it was only the upsurge of Japanese nationalism from the 1990s that caused a change back home in the perception of men like Mr Ono, who are known as "Nikkei Indonesians".

Former Tokyo governor Shintaro Ishihara visited Kalibata cemetery in Jakarta to pray for them in 2004 and declared these soldiers heroes.

Prime Ministers Shinzo Abe and Yasuo Fukuda did likewise when they visited the capital.

Deputy Defence Minister Sjafrie Sjamsoeddin said of Mr Ono this month: "He is a living witness to the history of Indonesia's independence. We are grateful for all he's done."

Mr Ono continues to follow the news on TV in spite of his failing eyesight, and furrows his brows as he laments the corruption in Indonesia and recent conflicts in the region.

It is a real pity - "sayang sekali" - that countries in the region continue to squabble from time to time.

"They shouldn't be too quick to pick a fight," the old soldier says, adding that the time for war is past.

"China, Japan, Indonesia, Australia - we should be working together so our people can progress together."