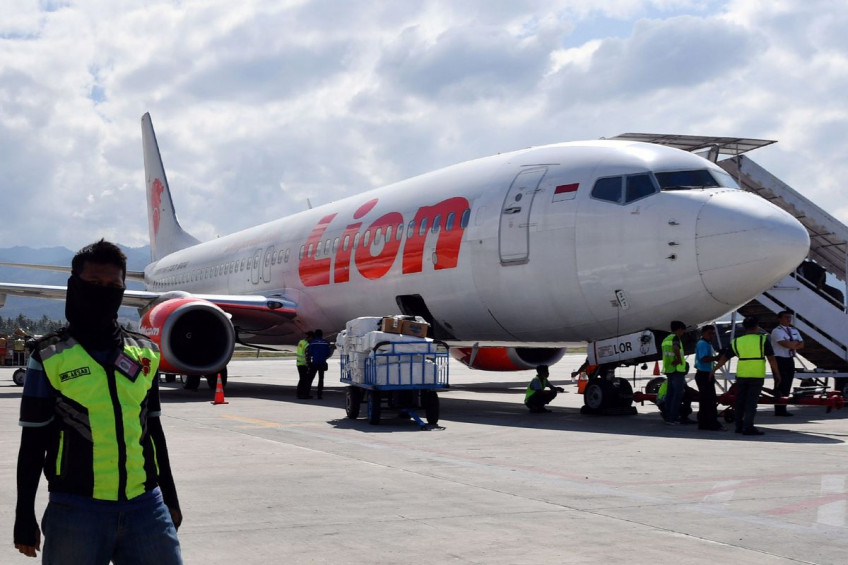 JAKARTA - An Indonesian Lion Air plane that crashed into the sea shortly after taking off from Jakarta on Monday had a technical problem on a previous flight, but it had been resolved according to procedure, the company's chief executive said.

"This plane previously flew from Denpasar to Cengkareng (Jakarta). There was a report of a technical issue which had been resolved according to procedure," Edward Sirait told reporters, declining to specify the nature of the technical issue.

He said Lion has operated 11 aircraft of the same model, the Boeing 737 Max 8, and the other planes did not have the same technical problem. Sirait said there was no plan to ground the rest of its Boeing 737 Max 8 fleet.

The flight took off from Jakarta around 6.20 a.m. and was due to have landed in the capital of the Bangka-Belitung tin mining region at 7.20 a.m., the Flightradar 24 website showed.

Data from FlightRadar24 shows the first sign of something amiss was around two minutes into the flight, when the plane had just reached 2,000 feet (610 m).

Its last recorded position was about 15 km (9 miles) north of the Indonesian coast, according to a Google Maps reference of the last coordinates from Flightradar24.

Debris thought to be from the plane, including aircraft seats, was found near an offshore refining facility in the Java Sea, an official of state energy firm Pertamina said.

The head of Indonesia's transport safety committee said he could not confirm the cause of the crash, which would have to wait until the recovery of the plane's black boxes, as the cockpit voice recorder and data flight recorder are known.

"We are preparing to depart to the location," said Soerjanto Tjahjono. "The plane is so modern, it transmits data from the plane, and that we will review too. But the most important is the blackbox." Safety experts say nearly all accidents are caused by a combination of factors and only rarely have a single identifiable cause.

The weather at the time of the crash was clear, Tjahjono said.

The accident is the first to be reported involving the widely-sold Boeing 737 MAX, an updated, more fuel-efficient version of the manufacturer's workhorse single-aisle jet.

Indonesia is one of the world's fastest-growing aviation markets, but its safety record is patchy.

"The industry has grown very quickly and keeping pace with that growth is challenging in keeping the safety culture intact," said Greg Waldron, the Asia managing editor of industry publication FlightGlobal, which keeps an accident database.

If all on board prove to have died, the Lion Air crash will rank as Indonesia's second-worst air disaster, after a Garuda Indonesia A300 crash in Medan that killed 214 people in 1997, he added.

Founded in 1999, Lion Air's only fatal accident was in 2004, when an MD-82 crashed upon landing at Solo City, killing 25 of the 163 on board, the Flight Safety Foundation's Aviation Safety Network says.

In April, the airline announced a firm order to buy 50 Boeing 737 MAX 10 narrowbody jets with a list price of US$6.24 billion (S$8.62 billion). It is one of the US planemaker's largest customers globally.