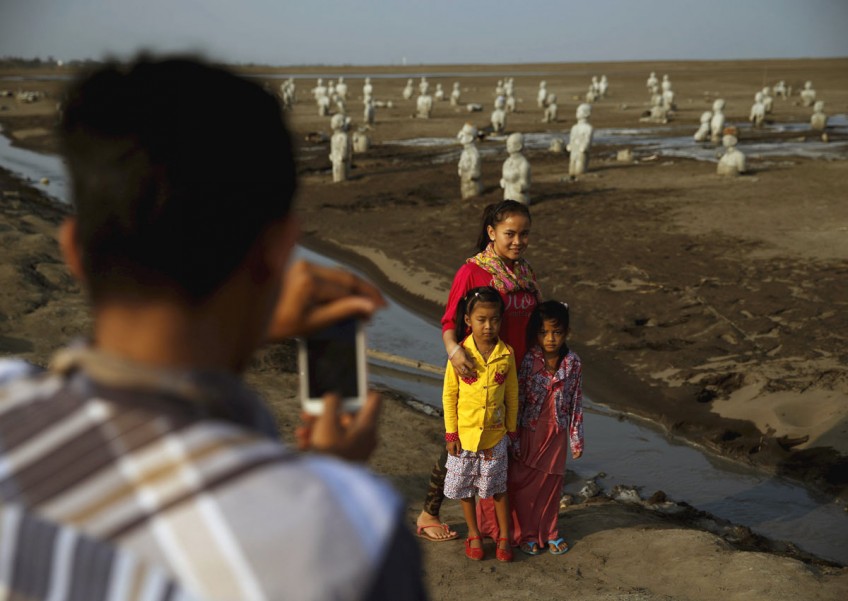 People watching hot mud flowing out of the ground in Desa Pejarakan Kecamatan Jabon, Sidoarjo in September 2010.
The Jakarta Post

SIDOARJO, Indonesia - Plodding around a vast field of mud that sits on top of a dozen submerged villages, tourists snap photographs of a volcano that is still spewing sludge nearly a decade after it erupted in one of the strangest disasters on record.

A short distance away, a woman surveys stone sculptures of half-buried people and monuments commemorating the 2006 catastrophe that displaced tens of thousands of villagers and transformed a landscape stretching across hundreds of hectares at the eastern end of Indonesia's Java island. Reports at the time put the death toll at around a dozen.

Disaster tourism has become more common in Indonesia, where visitors are drawn to sites of earthquakes, floods and volcanic eruptions to witness the aftermath of catastrophes or simply do some soul-searching.

"I had watched a lot of the news on television, but I didn't expect that seeing it with my own eyes could give such a different impression," said tourist Wisnu Titik Kartiani at Sidoarjo's mudflow disaster site. "If this is called tourism, I suppose this is tragic tourism."

Her guide, Sumono, was one of the villagers who now ferry tourists on their motorcycles or sell videos of the disaster that took away their livelihoods as factory workers.

"We are grateful for any work we can get," he said.

At its peak, mud was spewing at a rate of around 150,000 cubic metres a day from the volcano at Sidoarjo, which many believed was triggered when PT Lapindo Brantas, a company linked to the powerful Bakrie family, was drilling for oil and gas.

The Bakries denied wrongdoing and said it was due to natural causes.

The government had agreed to foot part of the compensation costs and, to date, around 90 per cent of the victims had received payments, said Wahyu Sutopo, an official at the Sidoarjo Mudflow Mitigation Agency.

While some may consider the chapter closed, others are keen to preserve the disaster as part of Indonesia's history.

Among the statues that have sprung up at the site is a giant effigy of Aburizal Bakrie, patriarch of the Bakrie family, which stands near a stone tomb etched with the words "let this nation not forget".