Indonesia's president cuts short US trip due to haze crisis 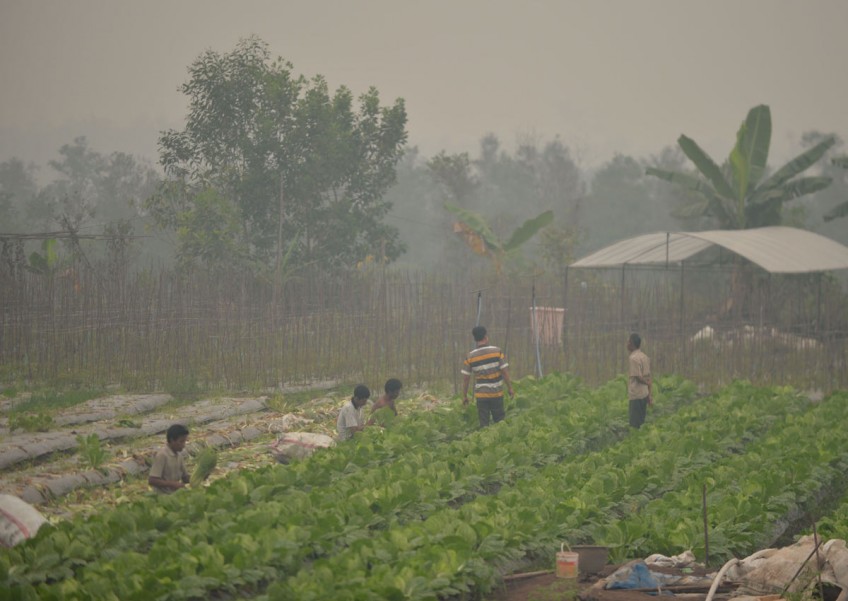 Farmers work on their farm engulfed in a thick haze on the outskirts of Palangkaraya city, Central Kalimantan on October 26, 2015.
AFP

JAKARTA/WASHINGTON - Indonesia's president Joko Widodo will return early from an official trip to the United States due to a haze crisis caused by raging peat fires in the Southeast Asian country, the government said.

Indonesia and the wider Southeast Asian region have been suffering for weeks from smoke caused by smouldering forest fires in Sumatra and Borneo islands that authorities have struggled to contain.

"The president will return a day earlier and will not be going to the west coast of the US," Cabinet Secretary Pramono Anung said. Widodo will fly back on Tuesday evening.

Widodo, who arrived in Washington on Sunday, said planned meetings with Apple and Google in Silicon Valley on Wednesday would go ahead without him. They are aimed at attracting hundreds of millions of dollars in investment into Indonesia's tech sector.

"I have asked several ministers to proceed with the meetings with the CEOs on the west coast," Widodo said in a statement released by the presidential palace in Jakarta. He said he would fly directly to the haze-affected areas.

Widodo met US President Barack Obama on Monday, when they discussed climate change ahead of a UN climate summit in Paris in December.

Obama said later it was important for large countries like the United States and Indonesia "to arrive at the strongest possible set of targets and international agreements when we arrive in Paris".

Widodo said they had held "a thorough discussion" on climate change and agreed to work together "for the sake of our future generations".

"Especially in Indonesia, we have a big challenge right now. We have peat fires, and the efforts to extinguish it is quite challenging," he said.

Indonesia is home to the world's third-largest tropical forest and is the sixth-biggest greenhouse gas emitter due to deforestation, the degradation of peatland and forest fires.

Nearly 100,000 active fires have been detected in Indonesia so far in 2015, according to the Global Emissions Fire Database.

The World Resources Institute think tank estimates that, since September, daily greenhouse gas emissions from those fires have exceeded emissions from all US economic activity.

Tens of thousands of Indonesians are suffering from respiratory diseases because of the haze, which has also caused school closures and flight disruptions.

The capital, Jakarta, and western Java were covered in a "thin layer" of smoke but pollution levels were not dangerous, the agency said.

Indonesia has submitted a national strategy to the United Nations outlining how it will tackle climate change from 2020, pledging a voluntary emission reduction cut of 29 per cent by 2030 that can be raised to 41 per cent if other countries offer financial assistance.

The United States has said it would give Indonesia $2.75 million to combat haze issue, a sum criticised for being tiny relative to the problem. Environmental groups have called on Widodo to address the causes of the fires better rather than spend taxpayers' money on fighting them.