Cases of sexual assault at Indonesian campuses have risen in recent years.

The case of an Indonesian university dean who was found not guilty of sexually assaulting a student in eastern Sumatra has come at a crucial time following the passage of a new sexual violence bill.

On March 30, a court in Pekanbaru threw out the case involving Syafri Harto, dean of Universitas Riau's (UNRI) political science department, who had been accused of sexually assaulting a student last October.

The student said Harto had kissed her on the cheek, touched her shoulder, then tried to kiss her on the lips. He also allegedly said he loved her, after which she pushed him away and fled his office.

The three judges hearing the case were all male. They said there was no conclusive evidence that Harto had committed a crime.

Rian Sibarani, a human-rights lawyer who works for the Legal Aid Institute in Pekanbaru and who supported the female student in pursuing the case, said the judges maintained the complainant "had not been hit or forced into sexual activity".

"[They] decided that this meant that there had been no sexual abuse committed, without taking into account that she had suffered from psychological abuse," Sibarani said.

The judges also ignored a psychologist's report and a polygraph test done by the police that found Harto had not been truthful, he pointed out. 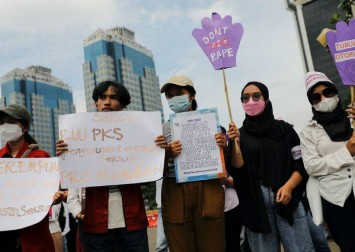 If the UNRI student's case had been heard after the new law came into force on April 12, the outcome may have been different, legal scholars said.

It further stipulates that a court must compel convicted abusers to pay restitution and authorities to provide counselling to victims.

Cases of sexual assault at university campuses have risen across Indonesia in recent years, along with a general rise in sexual violence complaints.

So much so that #NamaBaikKampus (#TheGoodNameOfTheCampus) is a well-known hashtag on social media when discussing such cases — many of which are often suppressed by administrators for fear of tarnishing the reputation of the institution.

Last year, Indonesia's Minister for Education, Culture, Research, and Technology, Nadiem Makarim, declared that Indonesia was in the grip of "a critical emergency" regarding on-campus sexual violence.

He also signed into force legislation that requires campuses to create a task force of majority female lecturers and students and stipulates 20 different kinds of prohibited acts that universities must investigate.

A 2020 Education Ministry survey found that 77 per cent of lecturers at Indonesian universities thought that some kind of sexual abuse had occurred on campus and that 63 per cent had not reported such cases to officials. 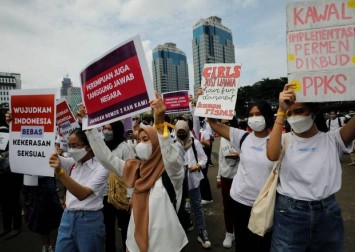 Elizabeth Ghozali, a lecturer in criminal law at Santo Thomas Catholic University in the city of Medan, North Sumatra, said sexual harassment on campuses occurred when there was a power imbalance. Male lecturers or male senior students would impose superiority over junior female students.

"The difference with 'ordinary' cases of sexual assault is that these can happen anywhere or randomly, such as a woman walking home alone at night. But sexual assault cases within academic institutions often happen because of a culture of abuse that these power dynamics have fostered."

Ghozali said students were also reluctant to report such cases as they were "hard to prove and colleagues and institutions often try to protect each other".

In the UNRI case, the complainant said that she asked to be assigned a different thesis supervisor but university administrators said no, and advised her not to mention the matter again, for fear that it would affect Harto's marriage.

She then reported the case to her student union, which recorded her statement and posted it in a video on Instagram. Harto denied that he had assaulted the student and claimed both she and the union had defamed him. He requested damages, although the police refused to accept his complaint.

There was an outpouring of support from UNRI students and the general public after the case went viral online, and the female student made a police report. After a police investigation, Harto was charged with "molestation" in January.

Mutiara Ika Pratiwi, the head of Perempuan Mahardhika, a women's rights organisation that supported the student in the UNRI case, said she hoped that the new sexual violence law would help matters.

"Unfortunately, cases such as this are very common on Indonesian campuses," said Pratiwi, adding that sexual abuse at Indonesian educational institutions often follow repeated patterns that will need to be tackled in the future to prevent more cases from occurring.

"Cases almost always include someone who has power over academic grades, the formation of a closed investigation team on campus and perpetrators who have impunity," she said.

Sibarani, the human-rights lawyer, said more needed to be done to tackle sexual violence and reframe cases from the point of view of the victims who face an uphill battle accessing justice.

"The lack of witnesses or evidence doesn't mean that an act never occurred," he said. "We need judges who are progressive, and have a gender perspective when handling cases of sexual violence."