Three judges - Artidjo Alkostar, Salman Luthan and Margiatmo - rejected the former Jakarta governor's challenge against his conviction, which sentenced him to two years in prison.

"The appeal has been rejected. The judges cannot accept the arguments presented," court's spokesperson Suhadi told The Jakarta Post on Monday (March 26).

Josefina Agatha Syukur, a lawyer representing Ahok in a case review over his blasphemy conviction, has said that she has yet to receive official information regarding the verdict.

"We can't make a statement just yet as we have to gather information first and discuss our next steps with the team," she told The Jakarta Post on Monday. 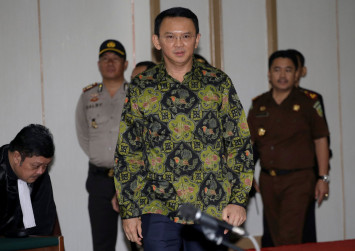 Ahok filed the petition in February, nine months after the North Jakarta District Court found him guilty of blasphemy and sentenced him to two years in prison for making a comment on a Quranic verse, which Ahok believed had been used by politicians to discredit him.

Ahok's lawyer and sister, Fify Lety Indra, had said she believed the North Jakarta District Court had made a mistake in declaring Ahok guilty of blasphemy.

She said the guilty verdict against Buni Yani, a communications lecturer found guilty of tampering with video footage of a speech given by Ahok that was used as evidence to lodge the blasphemy allegations against the former Jakarta governor, was the basis for the case review request.

"The legal argument for our petition is that the judges (at district level) made a mistake in their verdict (on Ahok), particularly in relation to Buni Yani's verdict," she said after the preliminary hearing.