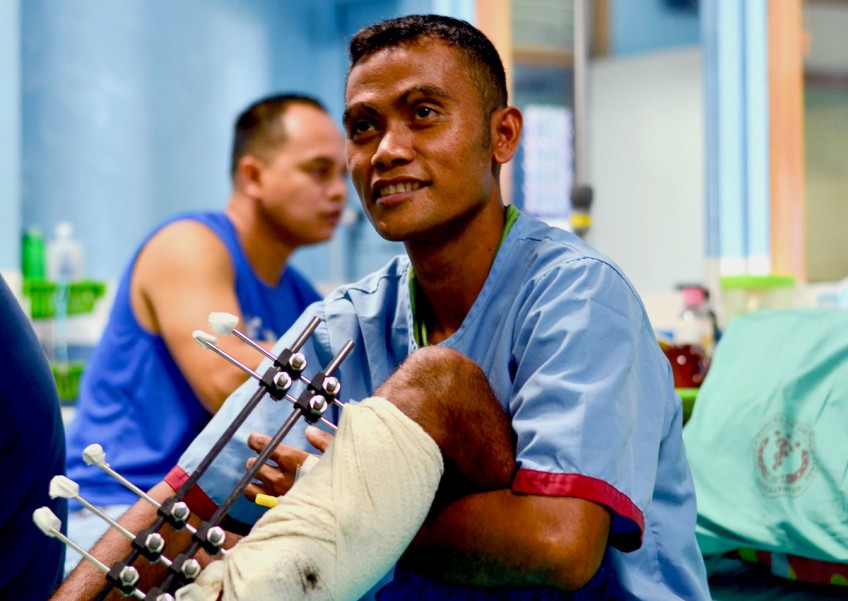 Corporal Benie Flores sitting up on his hospital bed where he is being treated for a shattered leg from combat with Islamist militants in the southern city of Marawi, in the Armed Forces of the Philippines Medical Center in Manila.
AFP

Inside the "Heroes' Ward" at a hospital in the National Capital Region, wounded soldiers read the Bible and recount horror stories of an unprecedented urban war against fighters linked to the Islamic State of Iraq and Syria (ISIS) group.

A month of combat in Marawi City has claimed the lives of 62 troops and injured hundreds of others, while raising fears the Philippines has suddenly become a favourite new battleground for ISIS.

At the crowded Manila hospital ward, soldiers give harrowing examples of how the military - with little experience in urban warfare - were caught unprepared for their enemy's tactics and brutality in house-to-house combat.

Marine Sergeant Sandy Benitez said he survived a battle that cost 13 other troops their lives by crawling for nearly five hours along a short stretch of street while trading fire with snipers, after a rocket-propelled grenade pierced his left foot.

"That was the worst firefight I've ever been in," Benitez, a 13-year veteran who had previously battled Islamist militants on remote and mountainous southern islands, told AFP.

"Some of my wounded colleagues, they were losing hope and getting rattled. Some were crying."

Benitez, 34, said he was mostly calm throughout the ordeal, except for when he watched a rocket-propelled grenade kill one of his friends who had enlisted with him.

"When you see your classmate die, sir, you can't help but shed a tear," he said.

Benitez said his unit had been deployed in the evening to try and capture one of the militants' strongholds, supposedly with the advantage of night vision goggles.

"But they threw gasoline at us, molotov bombs. They created fires, so they had visual on us as well," he said.

The military has decades of experience battling Islamic militants and communist rebels, with those conflicts claiming tens of thousands of lives.

But those wars have been largely waged in rural and mountainous settings.

The nation's military chiefs and frontline troops such as Benitez say they have relatively little experience in the type of fighting being waged in Marawi, a city of 200,000 residents.

Learning on the job

It began when hundreds of militants rampaged through Marawi, the most important Islamic city in the mainly Catholic Philippines, on May 23, taking civilians hostage and then posting images online of Christians they said had been executed.

They have since defied a relentless, US-backed bombing campaign that has seen entire districts destroyed, with their snipers based in homes and mosques continuing to pick off ground forces, and civilians being used as human shields.

"If the fight was held in a mountain without its share of civilians roaming around the battleground it would have been very simple," national military spokesman Restituto Padilla told reporters last week.

A military commander overseeing the battle in Marawi who has fought many wars in the southern region of Mindanao, but who asked not to be named to speak candidly, said most troops were learning on the job.

"We have a shallow pool of highly trained people for this specific situation," the commander told AFP, as he described soldiers spending two days trying unsuccessfully to clear a single house and threats such as trip-wire bombs.

Authorities say the militants are mainly from various small local hardline groups opposed to peace agreements that the main Muslim rebel organisations are pursuing, and that they have united behind ISIS.

Foreign fighters from places such as Chechnya and Libya have also joined, urged on by ISIS propaganda messages to descend on the Philippines, according to the military.

Soldiers have reported a new-found steel in their enemy in Marawi, with the militants staying and fighting for longer compared with previous battles in which fighters used more traditional guerrilla tactics and escaped quickly after carrying out attacks.

At the military hospital in Manila, Army Corporal Benie Flores, 30, was sitting on a bed with his left shin snapped in two from a sniper bullet that hit him in the third day of the conflict.

Flores said he had never been injured during his seven years as a soldier, which included many battles against the Abu Sayyaf, a US-listed terrorist group that is based on Basilan - one of the remote southern islands made up mostly of mountains and jungles.

"The difference is Basilan is full of trees while Marawi is full of rooms and civilians," he said.