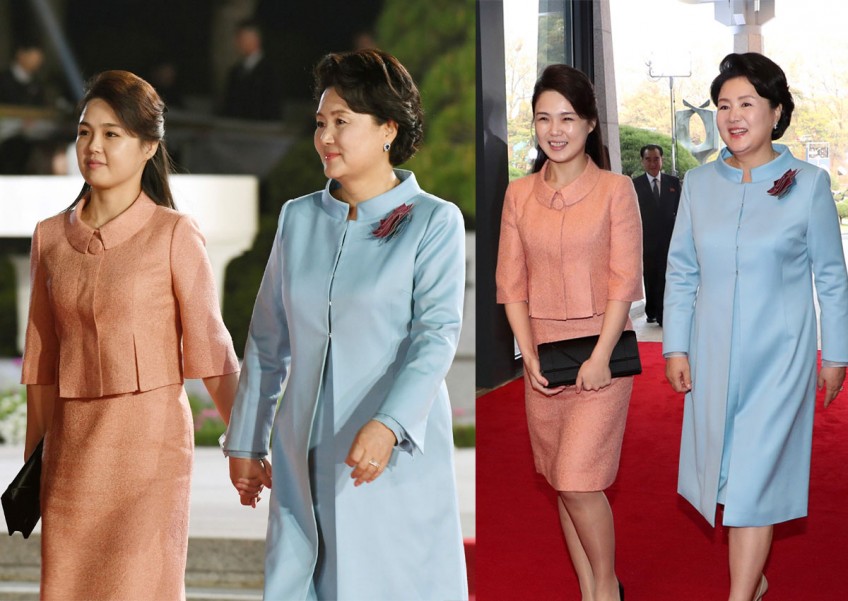 Among the many spectacles Friday's inter-Korean summit offered was the two Korea's first ladies' first-ever meeting with one another, and the seemingly instant bond they formed.

Ri Sol-ju, the wife of North Korean leader Kim Jong-un, made her much-anticipated appearance at Panmunjeom at 6:18 p.m. on Friday. She did not accompany her husband when he came for talks with South Korean President Moon Jae-in earlier in the day, and her attendance at the summit dinner remained unconfirmed until afternoon.

Upon her arrival, Ri was greeted by Kim Jung-sook, the wife of South Korean President Moon Jae-in.

It was the first time a North Korean first lady had ever met her South Korean counterpart.

Kim, who is some 30 years Ri's senior, extended a warm welcome and took her to the Peace House, where the summit had been taking place since earlier in the day. Ri was wearing a pastel pink dress, while Kim was wearing a powder-blue dress coat. Local media outlets interpreted the choice of their dress colors as representing spring - the season that symbolizes a new beginning, hope and peace.

"I'm a little embarrassed to be here since I didn't get to contribute anything," Ri said, when South Korean President Moon mentioned his wife made sure the Peace House looked at its best for the summit.

The theme of spring was used repeatedly throughout the summit dinner. A dessert named "spring of the Korean people" was served; it featured a pastel-blue unified Korea flag on a white background with decorative flowers on mango mousse. Also during the dinner, a South Korean child sang "Spring in My Hometown," a popular Korean folk song written in the 1920s, well before the division of the two Koreas.

And the two first ladies, in spite of seeing each other for the first time, seemed to have bonded well after the spring-themed banquet event.

The two were holding hands as they left the Peace House after the dinner, and did not let go of each other's hands until they reached an outdoor property where they watched a special performance celebrating the historic summit together.

Ri and Kim also exchanged hugs before the North Korean first lady and her husband left for Pyongyang following the summit in Panmunjeom.

"It was also as touching to see the first ladies bond on live TV, just as it was to see President Moon and Kim Jong-un meeting each other for the first time," said Park Jin-ee, a working professional in Seoul.

"It was almost as if watching a mother and her daughter enjoying their time together."

Park Hyun-ah, another Seoul resident, said seeing Kim and Ri felt different from seeing the South Korean first lady with her counterparts in other countries, such as US first lady Melania Trump.

"I think our first lady Kim has an outgoing personality, and she usually bonds with people very well," Park told The Korea Herald. "But what touched me was that Kim did not need an interpreter to communicate with Ri, unlike when she was with first ladies from other countries. It just reminded me that the two Koreas used to share many things together."

Kim 62, met her husband President Moon Jae-in while attending Kyung Hee University in Seoul. They married in 1981 and have two children. Her friendly and approachable nature has earned her the nickname "Happy Mrs. Jung-sook."

Ri, who is believed to be in her late 20s, is reported to have studied music and singing in China. She also visited South Korea back in 2005 for the Asian Athletics Championships in Incheon as part of a cheering squad. It has been reported that Ri worked as a singer before marrying the North Korean leader Kim Jong-un. According to the South's spy agency, Ri and Kim have three children together.

In spite of many differences, the two women have music in common. South Korean first lady Kim also majored in singing in university.

"You two have a similar educational background," South Korean President Moon Jae-in told his wife and Ri before the summit dinner. Kim was also present during the conversation.

"I hope you can collaborate on cultural and artistic exchanges between the two Koreas in future."