ISIS said to be wooing maids in HK 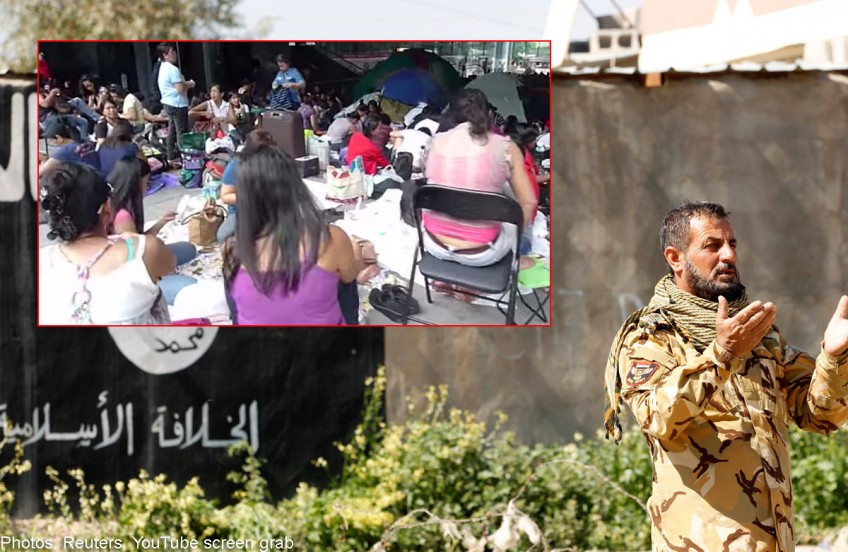 A maid agency told Oriental Daily News that many Indonesian domestic workers received what appeared to be ISIS recruitment leaflets from fellow Indonesians on Sunday.

The pamphlet encourages maids to join ISIS, saying it would send them to "work" in China's Xinjiang region, but there are no details on the type of work they would be asked to do.

The flier has a simple design, with a photograph showing more than 10 women covered from head to toe except for the eyes, and carrying an ISIS flag.

Two rows of words in Bahasa Indonesia are printed on the pamphlet - with one row telling readers that they are not dressed in the correct way, including their use of headscarves, and that they must be dressed like the women in the photo.

The other row says people would be distributing the ISIS fliers and recruiting members in Hong Kong.

The head of a group to help Indonesian maids, who has worked in Hong Kong for several years and was unnamed in the news report, said such recruitment began two years ago, but it was usually done by one or two people. However, more people seem to have joined the recruitment drive recently, and the leaflets are distributed at gathering areas frequented by foreign maids.

She said this particular group was different from the other groups, as it seemed to be independent and mysterious. "Many Indonesian maids are worried now, and I am scared too, as I am a Muslim," she said.

Ms Joan Tsui, the convenor of the Support Group for Hong Kong Employers with Foreign Domestic Helpers, expressed concerns that the maids may be persuaded by their compatriots to join ISIS.

"I am worried that some of the maids may be affected emotionally if they join the group," she said. "They could be emotionally unstable and they may harm children in their care."

She said that in the past, several maids had received leaflets promoting religious beliefs or wooing them to work in other countries, such as Russia, for higher wages.

Ms Sringatin (who goes by one name), a representative for the Asian Migrants' Coordinating Body, said she has not received the ISIS leaflets, but would try to find out more about the situation from the maids and remind them to be alert.

Barrister Albert Luk said that distributing religious leaflets is not illegal in Hong Kong, but it will break the law if there is evidence showing that the group is involved in terrorist activities or planning to carrying out terror acts in Hong Kong.

"The police should not let their guard down and should investigate if many people have received these leaflets," he said.

Mr Daniel Wong from the legal sector said that the distribution of the leaflets can be investigated under the anti-terrorism law if ISIS has been classified as a terror group, but he did not rule out the possibility that some people have been using the name of ISIS as a scam.

A police spokesman said there is currently no concrete intelligence to show that Hong Kong is a terror target, and the risks of Hong Kong facing terror attacks remain at the moderate level.

He said that Hong Kong police remain in close contact with law enforcement and intelligence agencies from other territories as they step up their counter-terrorism efforts.