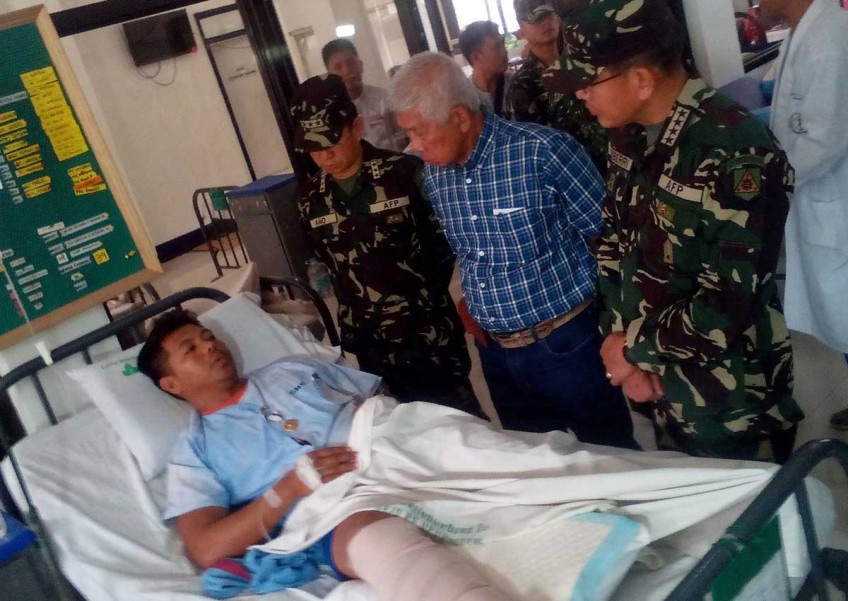 Philippines Defense Secretary Voltaire Gazmin (2nd R) and military chief General Hernando Iriberri (R) visit one of the 53 wounded soldiers at a military hospital in Zamboanga on the southern Philippine island of Mindanao on April 10, 2016, a day after soldiers clashed with the extremist Abu Sayyaf group.
AFP

MANILA - Islamist militants seized four Indonesian crew of a tugboat in the southern Philippines on Friday night, the third attack on slow moving vessels in about a month, a military spokesman said on Saturday, as troops battled Muslim rebels on a nearby island.

"We don't exactly know who took them but the only lawless group operating in that area is the Abu Sayyaf," Tan said, adding 10 Indonesians and four Malaysians were also abducted in two separate incidents early this month in the south.

Six other crew were left behind but one was shot.

"He is in stable condition now," the foreign ministry said, adding Malaysian water police evacuated the wounded crew to a hospital in Lahad Datu in eastern Sabah state, where the two tugboats were towed to safety.

The military said the Islamist militants have been targeting foreign crew of slow moving tugboats because they could no longer penetrate resorts and coastal towns in Sabah due to increased security.

The al Qaeda-linked Abu Sayyaf group, which is known for extortion, kidnappings, beheadings and bombings, is one of several brutal Muslim rebel factions, has stepped up activities on the remote islands.

Last week, the militants killed 18 soldiers and wounded more than 50 others in an ambush on Basilan island, prompting a massive army offensive with artillery and aerial bombings.

The military said 28 rebels had died in the week-long fighting.

On nearby Jolo island, the militants gave a final deadline on April 25 for payment of 300 million pesos (S$8.8 million) ransom for each of the two Canadians and a Norwegian captive or they will behead the three foreign captives.

Security is precarious in the resource-rich south of the largely Christian Philippines, despite a 2014 peace pact between the government and the largest Muslim rebel group that ended 45 years of conflict.