'It hurts so much to admit he's gone': Kenneth To's girlfriend on his shock death

Kenneth To and Kelly Kwong had been a couple since 2015.

They were one of the happiest Hong Kong sports couples with so much going for each other until tragedy struck. Kenneth To King-him died suddenly on Monday night, leaving behind countless friends and family.

He also leaves behind his girlfriend, Kelly Kwong Ka-yi, who was left devastated by the Hong Kong record-breaking swimmer's death in Florida. He had been training at the Gator Swim Club of the University of Florida, and died in hospital after feeling unwell following a warm-up before practice.

To, who was born in Hong Kong but emigrated to Australia at the age of two, had always said that one of the reasons he returned to the city in 2016 was because he wanted to be with Kwong. They had met for the first time a year earlier and their love blossomed.

To met Kwong during the 2015 World Cup short-course meeting in Hong Kong where Kwong worked as an announcer. They had a lot of things in common, not least their love for the sport.

Kwong's parents are swimming instructors and run the Lai Wa Swimming Club. She also trained as a swimmer and understands the kind of work needed to be a world-class swimmer. 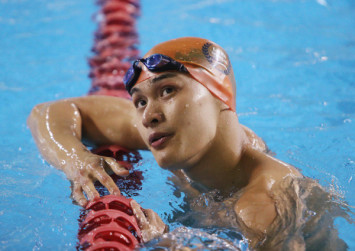 She took a different path to To, graduating from the language department of the Chinese University of Hong Kong and completing a masters in speech therapy at the Hong Kong Polytechnic University. She works as a speak therapist.

To had praised Kwong for introducing him to Hong Kong and the Hong Kong Sports Institute, where he continued his swimming career in the most prominent way, producing 17 Hong Kong records.

And To had always professed his love for Kwong, not feeling shy even in front of cameras during interviews to say that Kwong had always been the girl for him and they were a match made in heaven. "I love you very much," he said to Kwong during one interview, adding that Kwong could be credited for helping him brush up on his Cantonese.

When To first trained at the Hong Kong Sports Institute he was excited with the facilities at his disposal and he thanked Kwong.

"Thank you Kelly for suggesting that I come to Hong Kong to swim. There are facilities in the gymnasium, including accommodation, swimming pools, physical fitness rooms, dietitians, scientific research, etc.

"I don't have this kind of treatment in Australia. In Australia, I often practise with some student swimmers but now I can train with full-time swimmers in Hong Kong. The swimmers are training together and progressing faster." Kenneth To and Kelly Kwong at an official event together.​Photo: Instagram

Kwong finally summoned the courage to break her silence, saying on Instagram: "Thank you for your support, I finally have the courage to read the comments.

"It's really hard to stay strong coz it hurts so much to admit that he's actually gone ... but I'll try, try to be tough like he used to be, and what he would want me to be."